for 800 days
for the 1480 since
for patience when my questions aren’t easy
for a God who pays attention regardless
for Robyn, who is fierce, who is home, who knows me
for sons here and for sons gone
for family
for friends who’ve become family
for health
for a clear sky with a bite in the air
for gray days when I’m stuck in my mind
for the knowledge of tragedy
for the strength to help today
for differences which remind me to learn
for mountains, and the knowledge I am small
for the smile in Robyn’s eyes when she sees me
for safe places when I am weak
for people to know triumph with
for growth
for grace
for hope 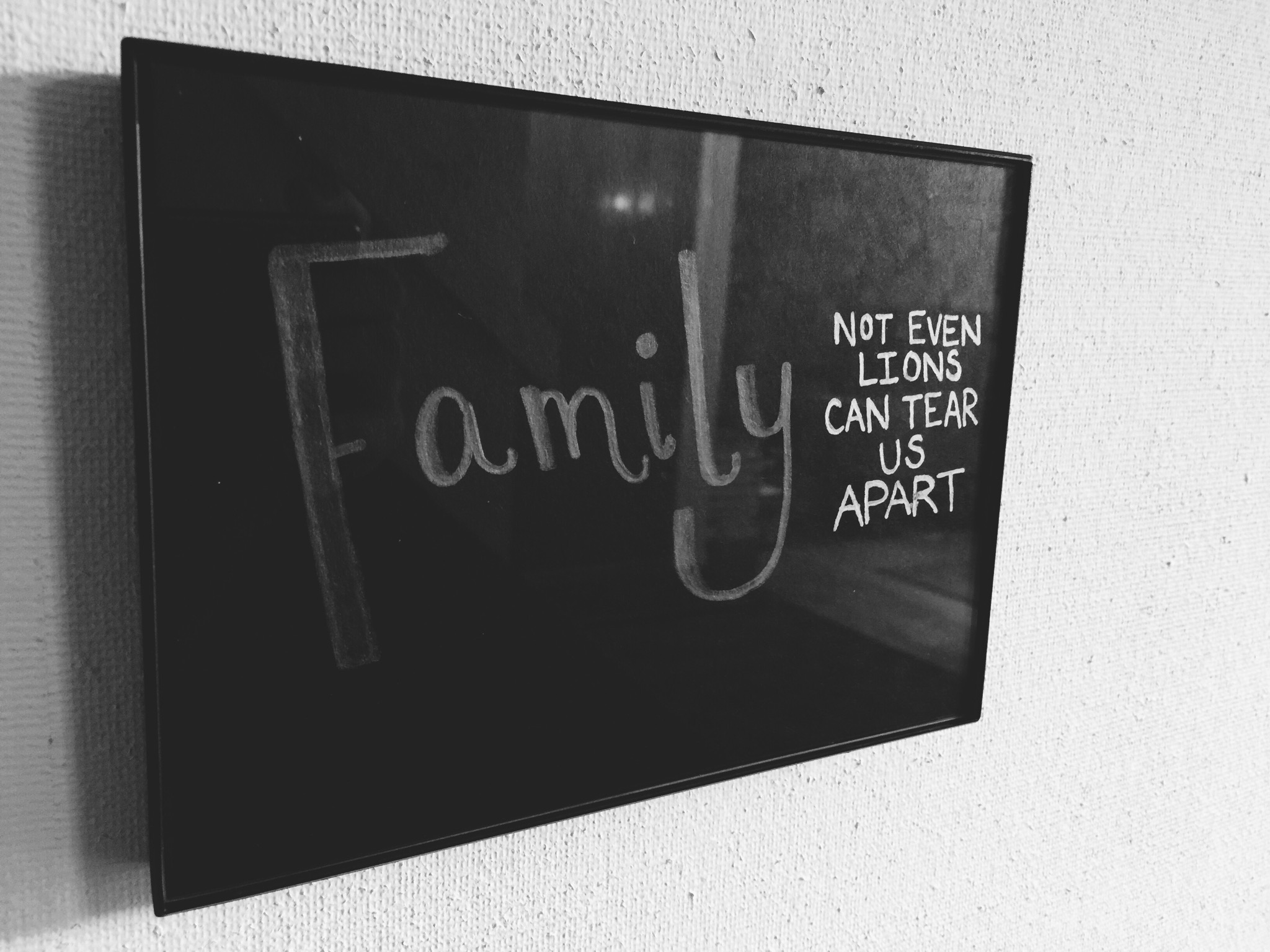 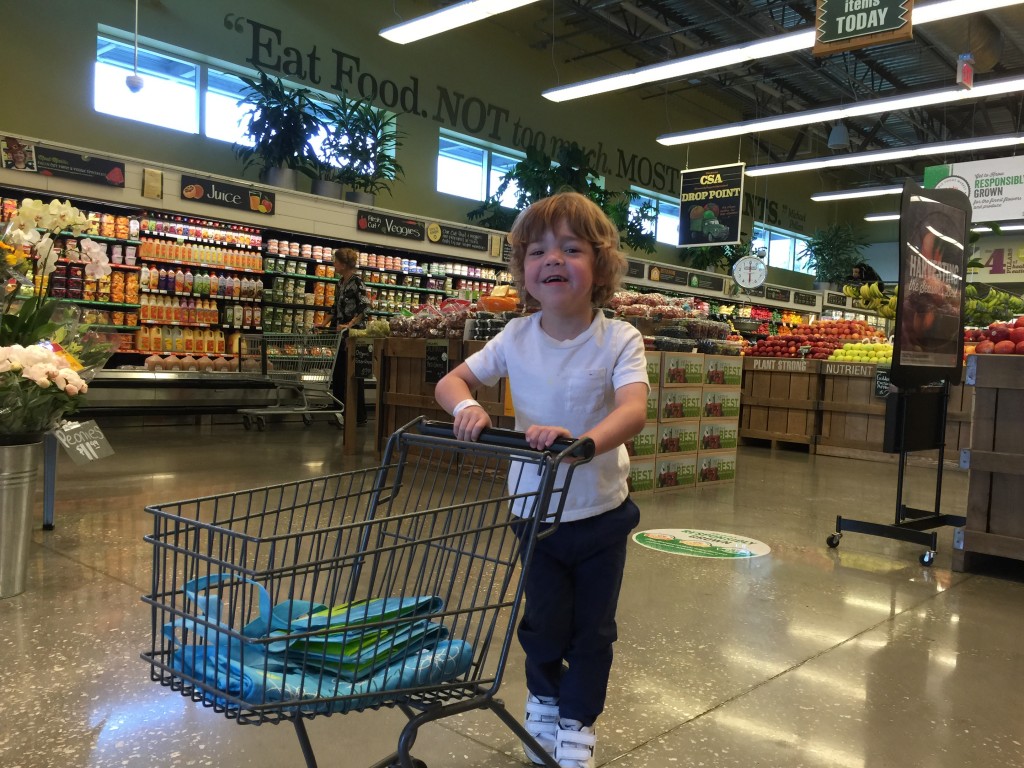 This kid is 4 months shy of 5 years old, and an absolute joy. If you say “cheese!” he drops everything and poses with the biggest grin you’ve ever seen. He tickles back. He gets back up after every fall, and he falls a lot. Unless there’s a bump on his head, on his way back up he’s smiling and determined. He’s got stronger abs than I do.

Charley has had, when compared to other kids his age, a tough coming up. He spent 7 months in the NICU at All Children’s in St Pete (we love you, ACH!), and was on oxygen for another 5 months when he finally did come home. We barely went anywhere with him – it required lugging an oxygen tank connected to his face with a tube and a nasal cannula, and we spent more time explaining than doing anything else when we were out. Not to mention having the entire attention of every single person we passed.

He didn’t eat for years by mouth, and still has a MIC-KEY button on his stomach and gets his feeds pumped in. He’s getting better now – having his tonsils removed helped this year – but the doctors think it will be another couple years before he’s fully eating by mouth and can have the button removed.

Charley’s legs hurt all the time. He’s got mild cerebral palsy, which causes tightening of the muscles. Luckily for him, he retains most of his muscle flexibility, but his legs are the worst. He’s learning to walk still, at 4, but it’s made tough by how tight those muscles are – he has to walk everywhere on tip toes. We’ve tried leg braces, but are now looking into Botox injections into the muscle to calm it down. Apparently it works well. If it doesn’t, in a year or two he may need surgery to help keep those feet flat. We’re hoping to avoid that – and you can see he’s walking much better and farther than ever. 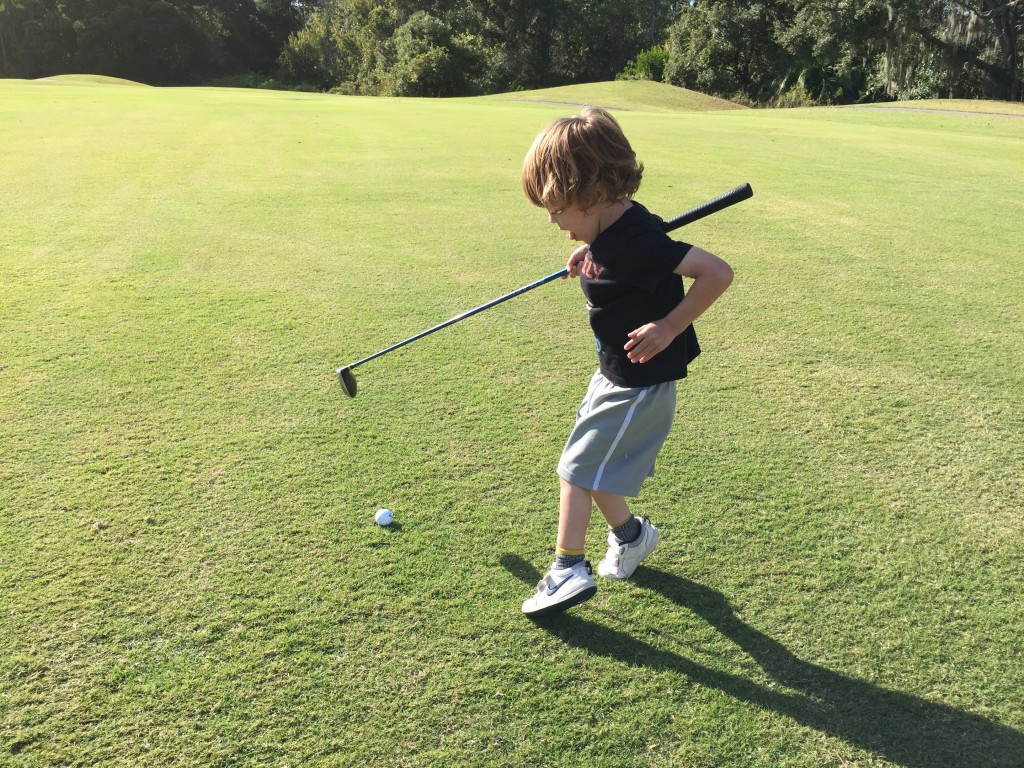 Playing some golf with Brighthouse 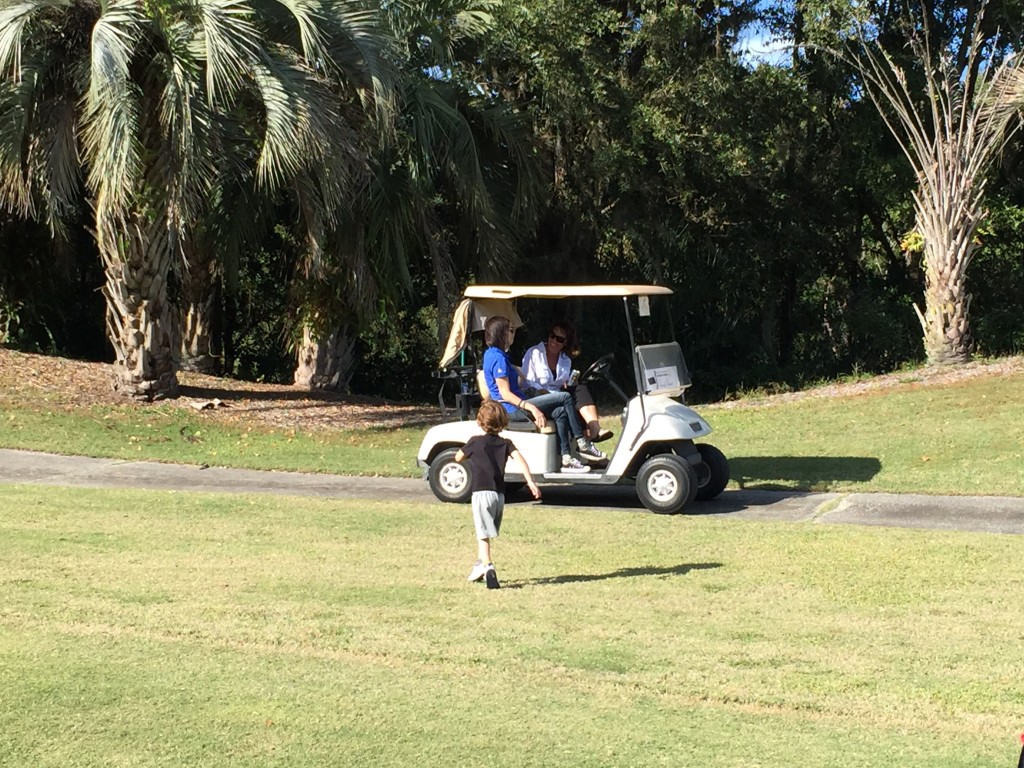 Look at him walking!

Still, Charley smiles constantly. He is behind in many ways, but not when it comes to joy. He dances when music comes on. He’s singing along now, and loves to shout from the back seat which direction he wants us to turn at every red light. When a truck stops in front of us, Charley yells “Go around it!” He takes pictures of himself on every iDevice he gets his hands on, and then closes all the apps out by double-clicking the home button and swiping up on all the open apps.

He laughs a lot. Robyn knows his ticklish spots, and gets him every day. He will laugh for a good while then say “stop it!” He can tell you what color our cars are by memory, and knows the directions to Rocket Fizz – our favorite local candy store. He loves Mickey Mouse, Buzz Lightyear, and Magic School Bus.

We have learned a lot from Charley these nearly 5 years. He, like us, smiles through pain. He is strong and caring and curious, and determined despite constant frustrations his own body forces on him. He knows other kids are walking better, and you can tell the days it’s frustrating to him. Still, he gets up every time he falls, and asks for help or tries again.

He helps mama brush her teeth, and is starting to make jokes (although I don’t think he always know they’re funny, ha) and “say the darndest things.” Some of my favorite moments with him are Saturday mornings cuddling on the couch watching a movie while he’s getting his morning feed. Or watching him wrestle our boxer, Jack, who is the picture of patience and the perfect dog for a 4 year old. When Charles moves back in, I am sure the two of them will continue to have a great relationship like they have had.

Robyn works hard on Charley – he is a lot of work. Though he makes it a pleasure to do, he requires hip x-rays, neurosurgeon updates (for the shunt in his brain which will stay there for life), gastroenterologist visits (to check his MIC-KEY and how he’s eating), swallow studies, physical therapy weekly, speech therapy weekly, occupational therapy weekly, eye dr appts, and a host of other specialists and professionals helping us get him caught up. He may never be the fastest runner, but he will be the most determined. Our team of care professionals seem to think by the time Charley is 7 or so, you won’t be able to tell he was any different than other kids. Well, as far as development goes – obviously he’s much cooler. 😉 It used to be hard to believe that – he seemed so far behind. But lately, we’re constantly amazed at what he knows and how much he’s growing. He’s going to continue being incredible.

You deserved a glimpse of the boy Charley has become, and is becoming. Robyn texted me earlier saying “it’s time for another Charley update!” She was right. Charley is a smile and joy. We love every minute of growing with him. 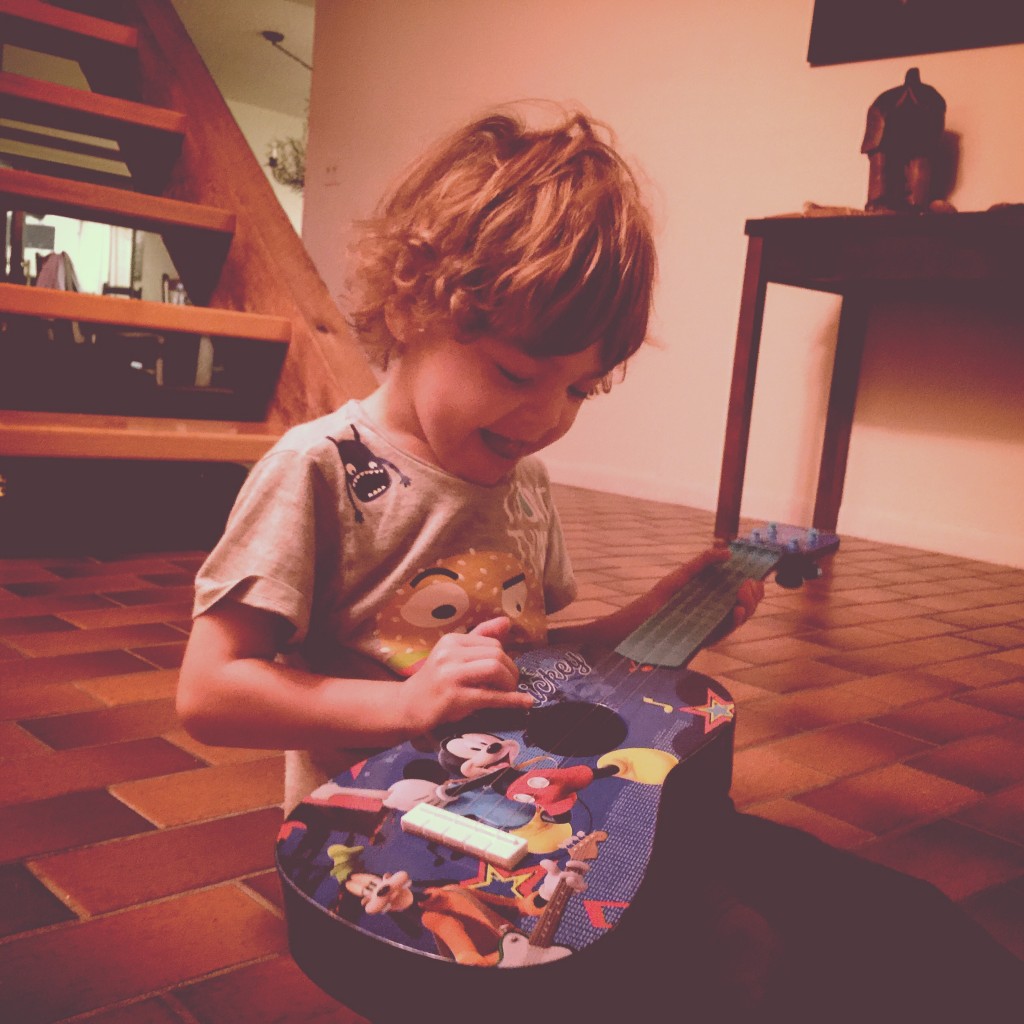 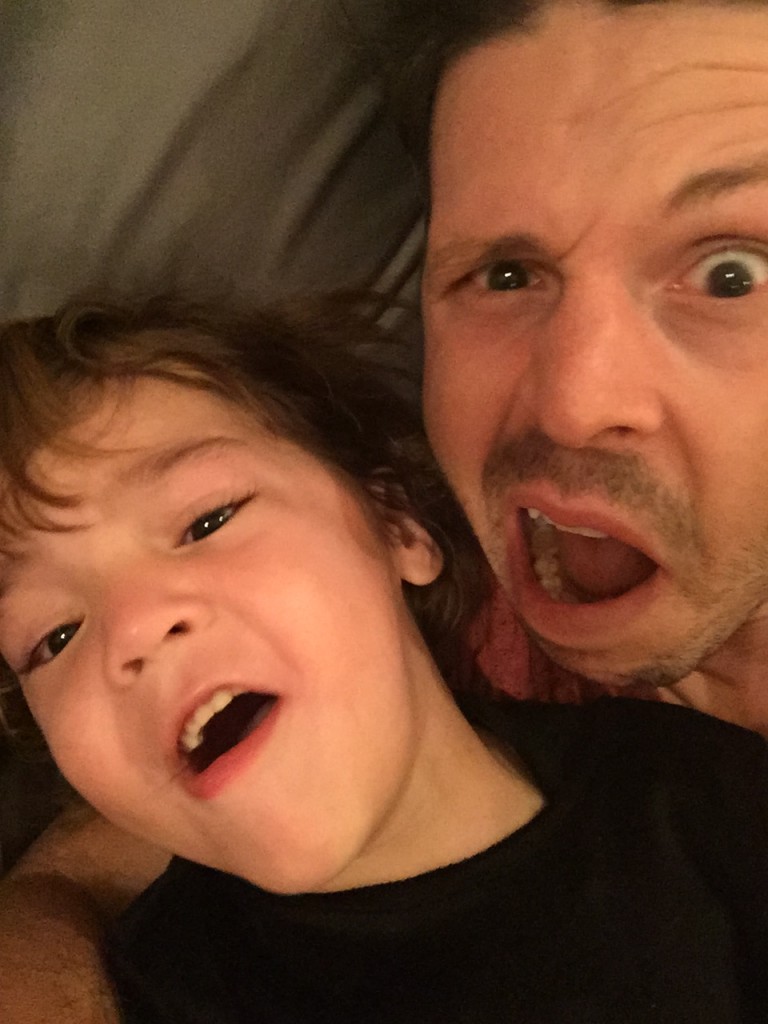 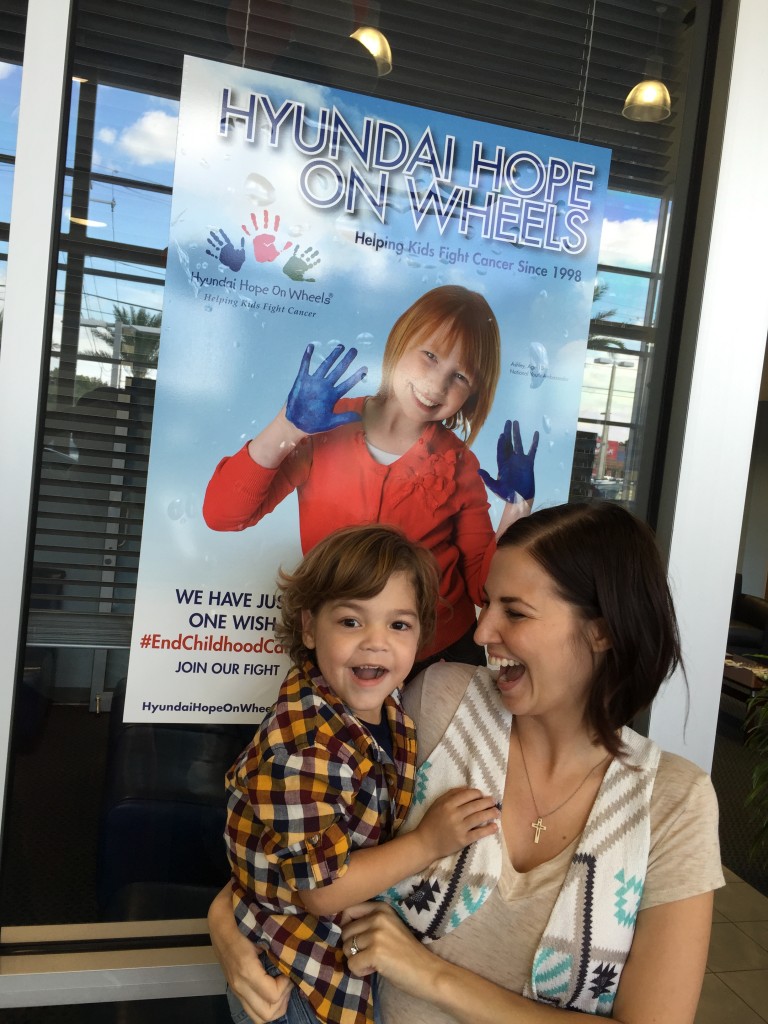 Our friend is on that poster!!! Go Hyundai 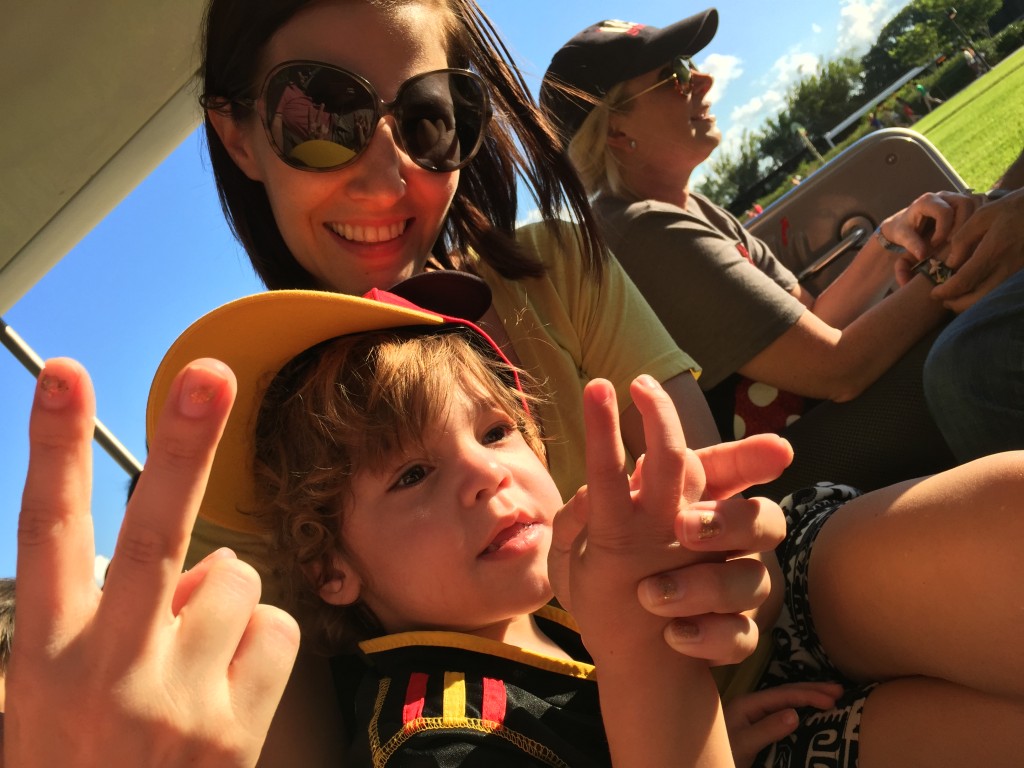 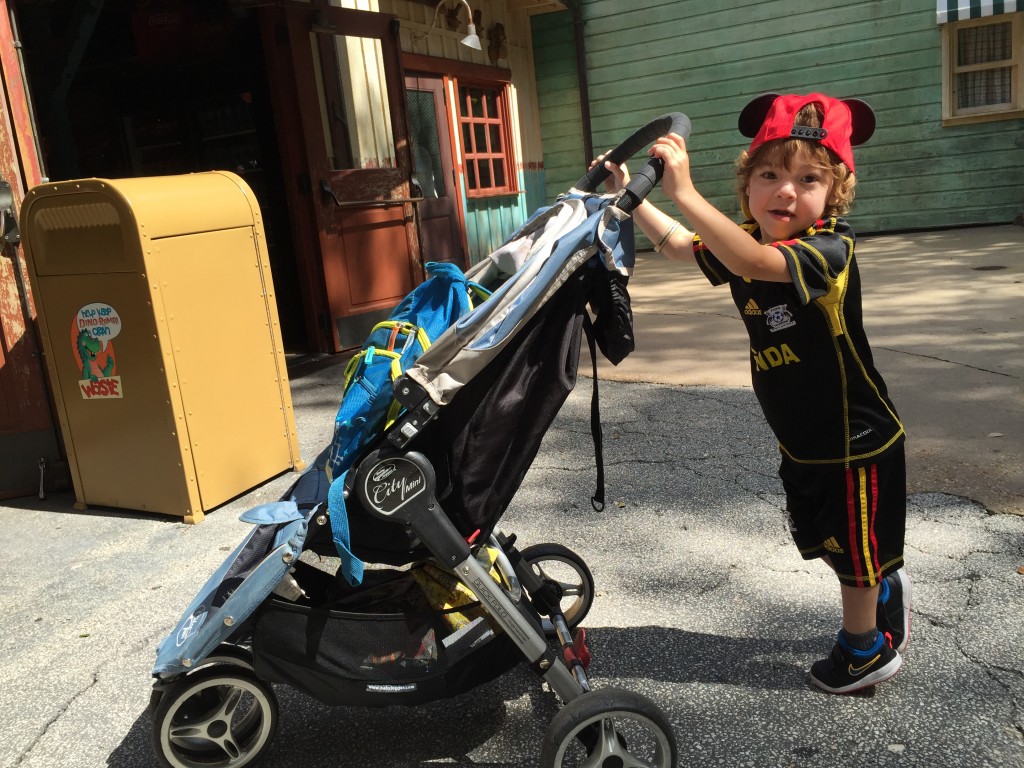 Pushing the stroller at Disney 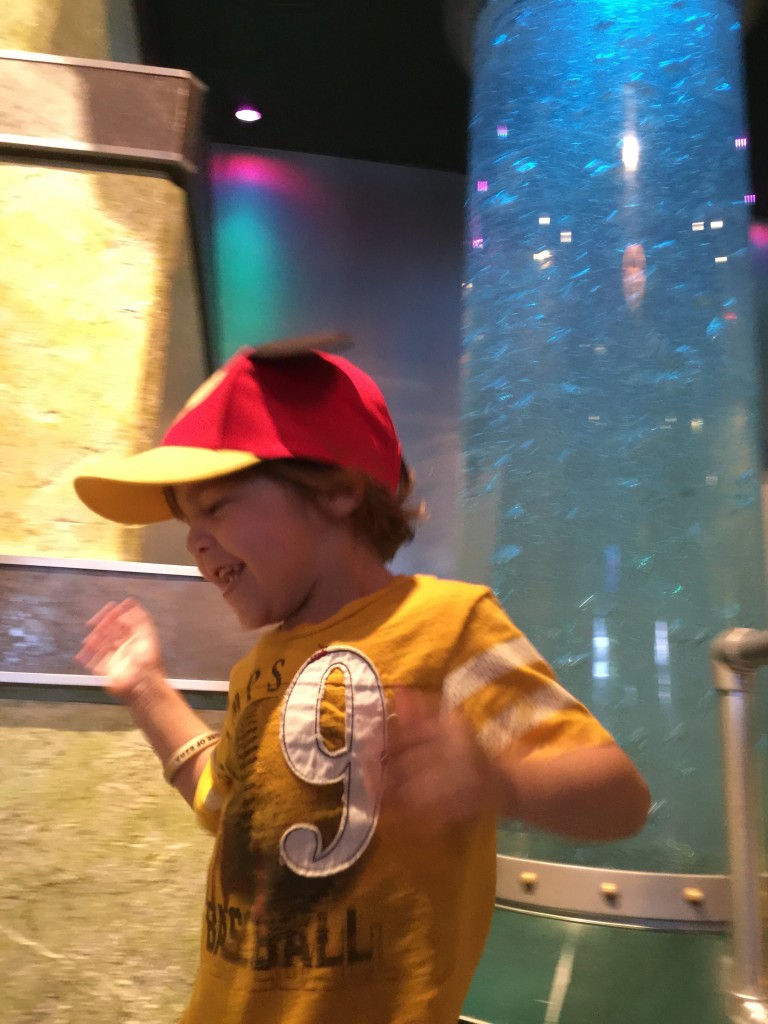 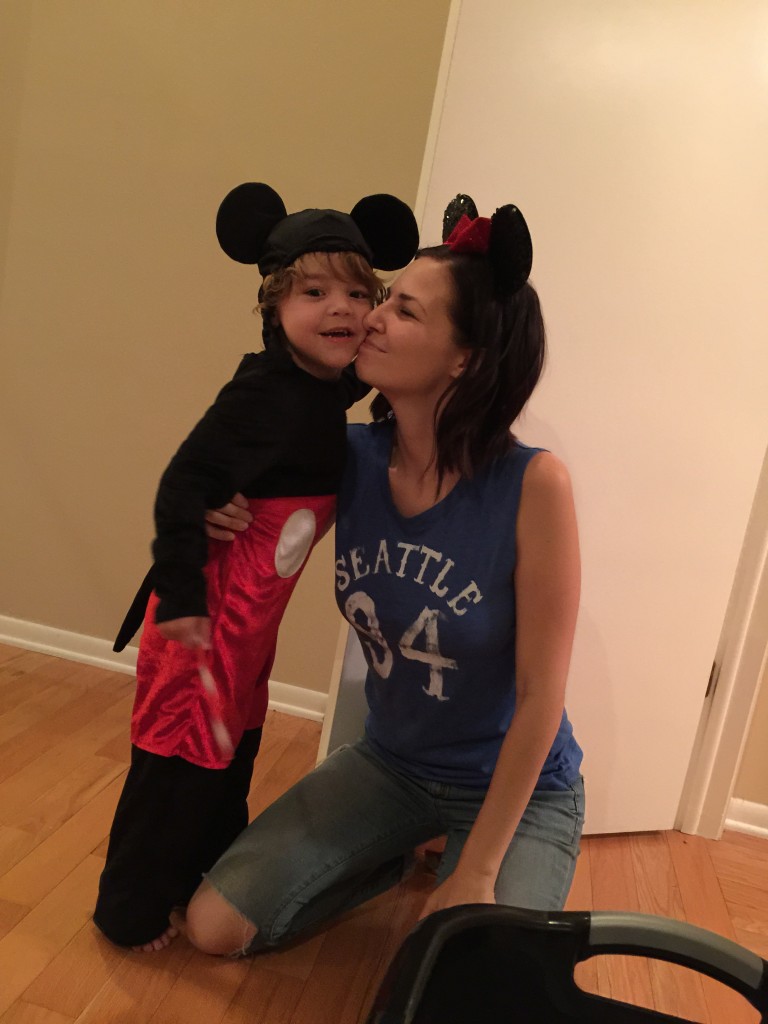 Right now, four years ago, I just wanted sleep. Ezra died just after 2am, and we left the hospital by 4. We were in our bed in Tampa by 6. Eight months before, we’d lost Price. Charley had come home from 7 months in the NICU just 30 days before Ezra died. We were tired.

Robyn and I had no clue how to be. We still don’t, i guess. We build our lives because hey, time’s not stopping. We work to change Ezra’s story for the next family. We answer the “how many kids do you have?” question with sad smiles. There is no “getting better” – there is only learning to seek beauty through a stained window of loss.

Robyn’s older brother David and sister in law Angela got into town last night from California. David is playing with my dad and brother in a golf tournament Brighthouse Enterprise is throwing to benefit Because of Ezra Tuesday. We’re honored to see incredible partners like Brighthouse Enterprise furthering a cure for childhood cancer with Ezra’s name attached in some small way. Thank you.

We stayed up late talking about life and how we’re often forced to be strong purely because there is no other option. We talked about how I don’t believe “everything happens for a reason.” I know people mean well when they say it, but it’s simply not true. Ezra didn’t need to die in order for the many good things since then to happen, nor did any of the children of so many friends we’ve made who have felt the horrible sting of childhood cancer. We choose not to be bitter, and we choose to turn this constant awareness of pain into passion to help others. And believe me, that choice has to be made every day. God makes beauty from ashes, yes, but He doesn’t have to burn something to the ground to cause the beauty. 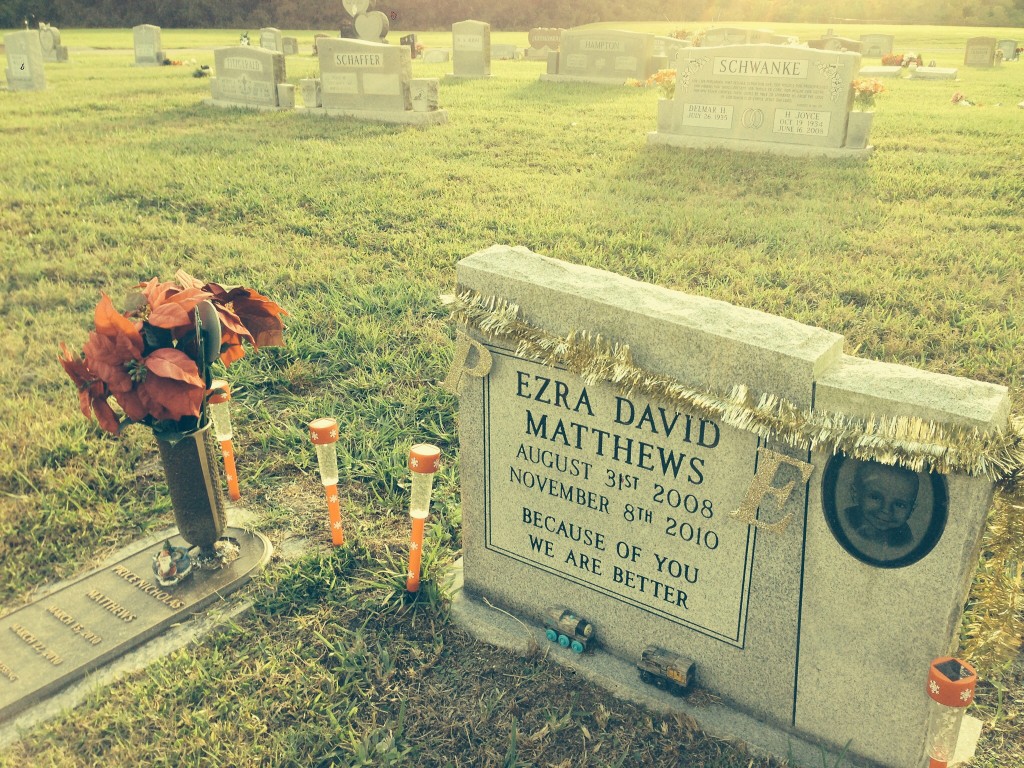 We are strong. We have been made resilient through hardship, and our intimacy with tragedy has tempered us. Today, we will visit both our sons’ graves. They lie under a bell tower in a field we often see deer in. They are right next to each other, and although we’ve not been able to find the strength to be the kind of parents who visit a gravesite often, when we do it is good. We’ve been there alone and together, with books and with a bottle of champagne, with tears and with laughter. Still, I know granite and bones are just a reminder of our sons; they are no longer here. There are pieces of them both left all over our hearts and our lives, and we will never let that change.