The memorial will be a public event – we will have a private burial later in the week. We’d love to see you all at the memorial to offer your sympathies and share this moment with us.

I’ve been sitting here for an hour erasing and retyping the last few sentences, and trying to figure out what else to type… and I’m at a loss. So let’s call it a night, and we’ll chat Monday. Thank you again for all your prayers and encouragement…

We spoke with Ezra’s doctors today, and it looks like his surgery to remove the tumor will be April 1st! Everything is going amazingly for him, and we’re glad to see it.

I’m not sure the previous update went out in email, many people said they didn’t get it – so if you’re reading this via email, please check CarePages for today’s earlier update.

On Saturday, Price developed a grade 4 bleed in his head, which is the highest grade. It is not uncommon for babies born this early to have a bleed in their head, and levels 1-3 are acceptable and generally work themselves out or are treatable. Once a baby has hit grade 4, there is a very slim chance they could survive, but if they become unstable, there is no longer anything the doctors can do.

Around 3:30pm today we received a call from the doctors letting us know Price had become unstable, and we should come to the hospital.

His condition was unrecoverable, with many complications that had developed over the last 24 hours or so which were not, taken as a whole, treatable.

Shortly after 4:30, Price was taken off his ventilator and Robyn was able to hold him while I sat next to them, and God took back what He so recently had given us.

I can’t explain why this happened. In Job 2:10, Job said “Should we accept only good things from the hand of God and never anything bad?” This hurts deep, and I struggle to see a purpose or reason behind it. And yet as my friend Brandon said, Price has made it to the foot of God quicker than any of us, and I know one day I will see him again. I know God wraps Himself around myself and my wife and my now-two beautiful sons even as He takes one son home much quicker than I had ever thought He would. I know the future is bright, and I refuse to let this scar make us angry or bitter. To do so would only be unfair to the family we have become and are becoming.

James 1:2-4 says “Consider it pure joy, my brothers, whenever you face trials of many kinds, because you know that the testing of your faith develops perseverance. Perseverance must finish its work so that you may be mature and complete, not lacking anything.”

So we persevere, knowing that our pain is heavy now, and God is still here. We hold on to His promises, even when we don’t understand why they didn’t seem to ring true in Price’s life.

“When death, like a gypsy, comes to steal what I love, I will still look to the Heavens, I will still seek Your face.” – Jars of Clay.

Apparently the twins did not want to wait – this morning at 9:06 AM our *tiny twins* were born. Baby A, Charley Adin Matthews, was 1lb 15oz. Baby B, whom we don’t quite have a name for yet (we’re thinking Price, and pretty sure the last name will be Matthews 😉 – it’s just that pesky middle name we’re working on – thought we had a few more weeks to decide…) was 1lb 13oz. They were delivered at 26 weeks, and term is 40 – so they’re about 3 months early.

They both look great, and are doing very well – they’ll have to be in the NICU (neonatal intensive care unit) for 2-3 months with assistance in finishing up the developing they’d have been doing in the womb. They are definitely responding and acting great right now, and babies at 26 weeks now are not a very scary thing – they grow just fine, just need a little extra time in the hospital in the beginning. Hey guys! I’m running out the door, but wanted to let everyone know the great news I just got on the phone.

The results from Ezra’s liver biopsy came back 100% negative – meaning there’s NO NEUROBLASTOMA IN THE LIVER! So those spots were just lesions left from the previous tumors, which is completely alright and nothing to worry about.

We’ll be chatting with the surgeon Monday most likely to schedule a date to remove the main tumor! Ezra saying hey to the kids who wrote him letters. Thanks kids! 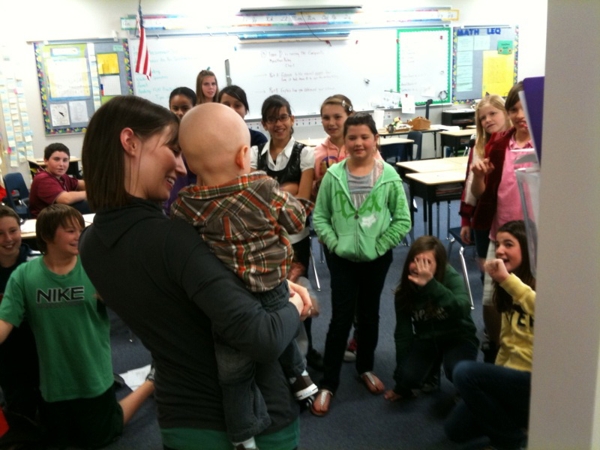 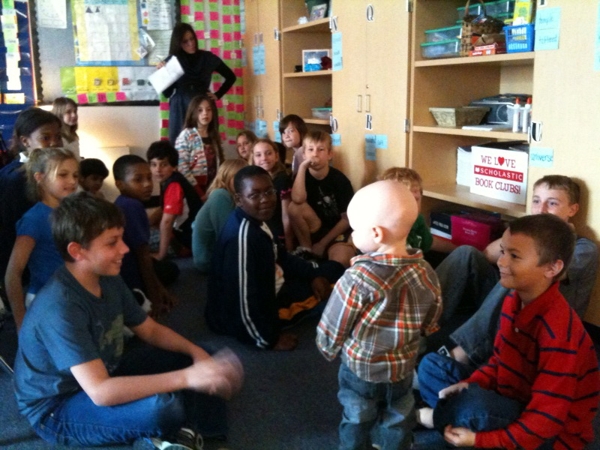 (warning – this update is long 🙂

Whew… well, the doctors have been monitoring Robyn and all feel the same way. The best course of action is to keep her admitted at UCH a minimum of 4 weeks. She’s been there since Thursday already, and they want to monitor her 24/7 at least until she’s 28 weeks, and then see what from there. If the twins can get to 28 weeks it’s a much better situation on birthing – although obviously we’re hoping they get much further than that. Let’s hear it for 37 weeks!

The doctors will reevaluate at 28 weeks and hopefully let her come home (still on bedrest) then. These few weeks are critical for making sure the twins are developed and strong. They check the babies’ heart beats and check for contractions multiple times daily, as well as have these [very sexy] giant plastic boots Robyn wears which apply pressure to her legs to keep her circulation good while laying there all day… what a woman to be able to put up with all this! She’s bored out of her mind and misses Ezra and I, but we’ll do what we need to do.

To top off that situation – we’ve got no maternity insurance. And definitely not from lack of trying/preparation. After Ezra was born (which we paid out of pocket, and was no big deal), I called well over a dozen companies to make sure we were insured for the next babies whenever we got pregnant again. NONE of them would offer ANY maternity coverage for Robyn until 3-5 years minimum after the previous C section. Something about higher costs and risks. And our income is too high for state/federal coverage… with Ezra that all worked out, as there are many funds specifically for pediatric cancer, but with Robyn we’re gonna be stuck with some whopping medical bills, and no visible way around it. I’m looking into some organizations… let me know if you have any thoughts here.

Ezra’s needle biopsy for the liver lesions is scheduled for this Wednesday at 3. We should know the next day or Friday what the results are, and be able to move forward with a plan for his continuing treatment based on the results of the biopsy. Praying they’re either benign or not even tumors…

I’m good here at the house with Ezra. Kim and Kalisha (for all you Tampa folks who know them) are setting up a schedule of people to bring Robyn dinners, help watch Ezra for me so I can still work in the mornings at least, and all around help out a bit. We’ve kinda settled into a schedule of having someone watch him from 10-2 while he’s awake, then he naps from 2-5, and after that I take him to go see Robyn. So I wind up with a decent work day, and Robyn gets to see us both as well each day.

Its tough to balance everything – making sure Ezra is seeing us, making sure work is getting done, and making sure we’re all sleeping… but we have such a great group of friends around us supporting it’s been 100x easier than it could have been. And a ton of people praying. I run into people at the grocery store, Starbucks, Target… all over saying “hey, aren’t you Ezra’s dad? We’re praying for you, hang in there..” etc. We really appreciate everyone’s encouragement and help.

Working for churches off and on in some capacity for well over a decade I understand it’s easy to get jaded and caught up in the pettiness of people’s focus. Too often I see people (and catch myself) more worried about who gets what building at what time and if someone is behaving/talking/looking the “correct” way rather than realizing God’s mindset, intention, and M.O.. Moments like the past 5 months for us are refreshing reminders the heart of God is still vibrantly active, necessary, and effective. As much as these situations cause doubt and hurt in us, they keep showing us how prevalent the needs are around us and how powerful helping is. Robyn and I’s hope is our rough times would not be pointless struggle, but would challenge folks to see the needs around them and make conscience efforts to address them wherever we can. You gain a little perspective on what matters when it’s put in jeopardy – a life centered only on your own needs will never satisfy you like one in which your aim is to be purposefully attentive to the world around you. Whether that means something as crazy as moving to Africa to teach basic health, Bible, and sustainable economy among other things (looking at you, Mike and Deb!) or just grabbing the door for the lady who’s got two bags and a kid in her hands at the mall… it’s all the same mindset.

We heard back from St Joes today, and they said after looking over his scans (including yesterday’s MRI) they would like to do a needle biopsy of the lesions in the liver. They’re not sure the lesions are even tumors (it could be just lesions from the tumors earlier in the treatment), and if they are, whether or not they’re cancerous. The needle biopsy, guided by CT, will be able to confirm.

If the lesions are not tumors, or are not cancerous, we will be able to simply move forward with the surgery as planned! If they are in fact still cancerous tumors, we’ll need to look further into the best way to handle them in his treatment.

Also – we seem to be having a medical year. Today was Robyn’s normal 24 week appt for the twins pregnancy. They discovered she was 1-2 cm dilated, which is supposedly not uncommon with twins. However, it IS cause to look closer, so we’re currently admitted at University Community Hospital on Fletcher while someone is watching Ezra at the house. A normal pregnancy term is 40 weeks, so obviously this is very early to be having any sort of labor.

The drs here will monitor her for a minimum of 48 hours, and as long as the dilation doesn’t increase, and she isn’t having contractions (we’ve been here over an hour and they haven’t seen any, so that’s a good sign), she’ll be released to head home, and will be on bed rest the remainder of the pregnancy (3 months!). We can handle that – we’ve got a great group around us to help.

IF in fact she IS having contractions, or dilates any more, they’ll need to give her some drugs to slow that down. They’re already going to give steroids shots for the babies to speed up lung development, just in case they ARE delivered prematurely (even in 8-10 weeks, etc). Best case is everything is fine, dilation stays where it is, and we head home and put Robyn on bed rest for a few months. Worst case, they slow down the labor and the babies are born in 3-4 weeks (they’d like to at least hold it off that long). Please pray it’s best case. 😉

Looking forward to a nice, calm, slow 2011. 😉 Crying babies and lack of sleep seems like a perfect day compared to the past 5 months!