Since we don’t yet have our news and blog section up on BecauseofEzra.org, I’m sharing with you here about what’s going on. Hope you don’t mind. 😉

We just got back from LA yesterday, and had some great meetings with people we’re incredibly excited to be partnering with in Because of Ezra. We have some really cool big events planned for this year, from coast to coast. I’ll continue to share as we get more details secure, but man are we excited. It’s looking like we’ll be able to really affect this horrible cancer.

Speaking of events – if you live local, you can help out this coming Thursday just by eating! A really cool couple of young ladies named Savie and Molly called up Red Elephant here in Tampa (near Dale Mabry and Bearss) and for anyone who eats there (or takes out) this Thursday (the 27th) and mentions they’re there Because of Ezra, Red Elephant will donate 15% of their ticket to the foundation. Savie and Molly also sold bracelets of their own accord at their school late last year – thanks, girls! 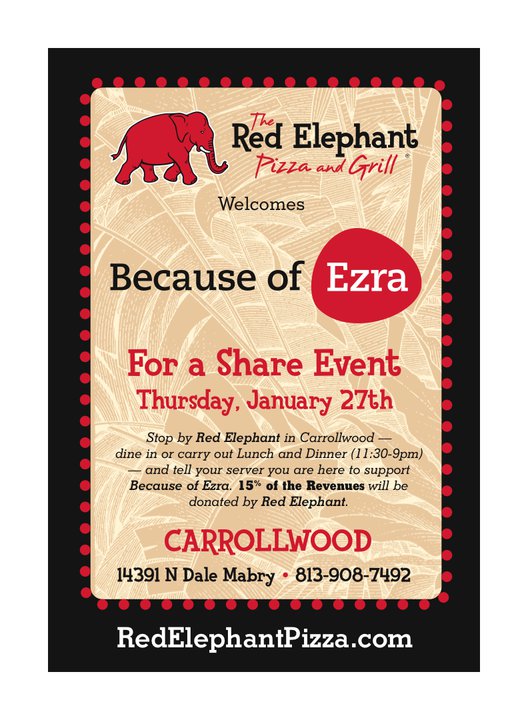 We’re still planning on running the Gasparilla Distance Classic in February, check out our last post for details – we’ve got the t-shirt designs in and finalized – check it out: 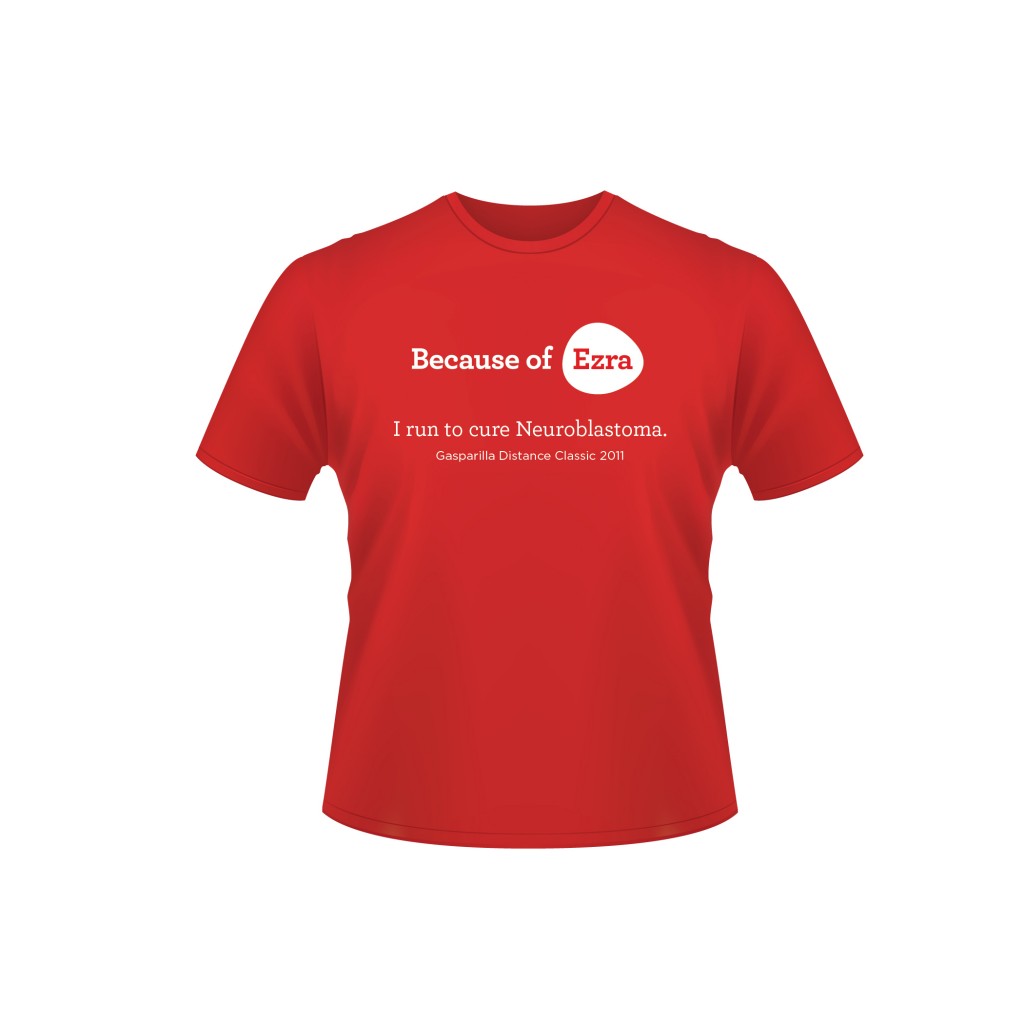 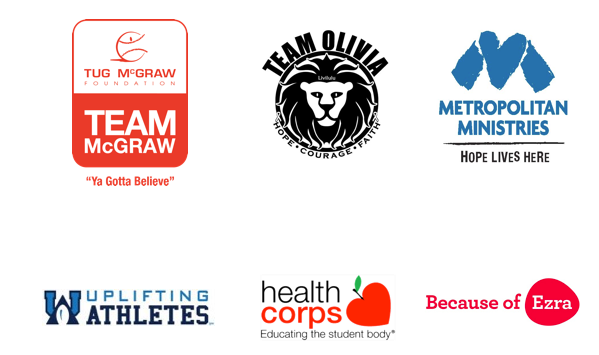 Thanks to our good friend Mandy we’ve now officially entered our first 5K run to benefit Because of Ezra (among others). If you live in the Tampa area, come out Saturday, February 26th for the Publix Gasparilla Distance Classic run. Most of us will be doing the 5k run – but if you’re not a runner don’t let that discourage you! They also have a 5k walk, and even a 5k stroller walk. They’ve also got longer runs if you’re one of those crazy runner folk. Since we’d love to get a ton of folk out there running to support Because of Ezra, anyone who donates more than $25 to Because of Ezra during the registration process will get a free tshirt to wear race day! We’d love to see lots of people running with BoE shirts.

When you register for the race (which costs $25) through this link, there will be an option to choose if you’d like to ALSO donate to a charity. Choose Because of Ezra, and if you give $25 or over, let us know your tshirt size and we’ll have one for you a few days before race day! You’ll need to either Facebook us or email us using the contact link on the right of TheMatthewsStory.com or on BecauseOfEzra.org. Some have asked if it’s better to give directly to us than through the registration process – if you are actually planning on doing the race, then no, it doesn’t matter. The run doesn’t take any percentage out, so 100% of the charity donation you send to Because of Ezra comes to us. The $25 registration fee of course goes to the race.

In other updates… well, there’s so many. We’ve been busy little bees, trying to work as hard as we are resting. Charley is doing great, he has grown so much, and he is developing well. He’s a stubborn little boy with a hidden smile, but he shows it if you work for it. 🙂 Our nursing is most likely going to be cut back from 24 hours to 8-12 (daily) at the end of this month, and so Robyn will be working even more with him. We’ve been blessed to have had this coverage the last few months – they were rough times for us, and the nursing coverage was so appreciated. Things are still hard mentally and emotionally, but we are gathering ourselves together best we can. Life doesn’t seem to take any breaks.

Because of Ezra is shaping up very fast – we’ll be in LA in 2 weeks to meet with the folks of NANT, as well as some folks we’ve been emailing quite a bit who it looks like will be a big help in this adventure. We’re working on a lot of new content for the website (becauseofezra.org – btw, are you our friend on Facebook? 😉 you totally should be…), and shaping up some very cool things for the rest of this year. Lawyers, doctors, and volunteers – oh my! We’ll try to update here as well as through the Because of Ezra Facebook page as we schedule more things – but it’s an exciting time. We will be effective at pushing awareness and funding into this cause. Did you know of the money the US government puts into cancer research, less than 3% goes to pediatric cancer research? ALL pediatric cancer? Drug companies don’t do much either, as pediatric cancer is much less profitable than adult cancer. Wow, huh?

That’s enough for now… there’s so much to share, but I’ll let you know more as we get everything more solidified. I miss Ezra every day, and we are committed to doing all we can to stop other families from having to feel this. 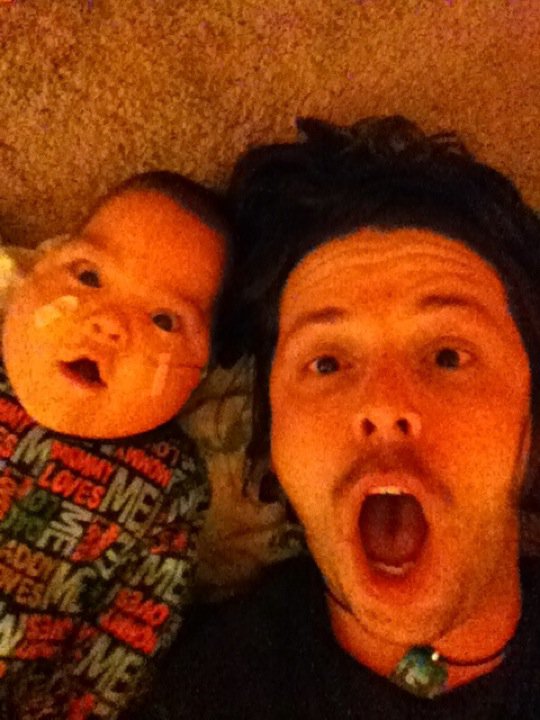 It’s 2011. A new year. This past month Robyn, Charley and I have been getting some rest and doing our best to enjoy the holidays. It’s been difficult, but we’re surrounded by a large group of loving family and friends who’ve been more help than they’ll probably ever realize. We took a vacation. We danced in friend’s living rooms to celebrate birthdays. We crammed 17 people around a wooden table for Christmas and smiled, laughed, and shouted to pass the baked feta. We walked around the world at Epcot for New Years and celebrated in each “country” at the time it was turning the year there. Robyn and I have cried both by ourselves and together deeper in this past 6 weeks than we have in our entire lives. We’ve felt an intense bond in our love grow as we feel this together.

Charley is doing so good! He is still on oxygen, but has been able to be off an hour daily, and he has no issues when he’s off it. We have another appointment for him the end of this month where the doc thinks he’ll probably be completely off oxygen, or at least during the day (might still need it while he sleeps just as a precaution). He’s getting better at taking the pacifier again, which is good – from there we can start working on getting him to take food or bottle by mouth. He’s nearing 20 pounds already, and still wearing the same size diapers Ezra did! My mom likes taking him out through the neighborhood on strolls when the weather is nice. Charley is babbling a lot now, and his little personality is showing itself all over. He’s an obstinate little guy, and we love it. He puts up with a lot! With many babies the hardest thing their day consists of is laughing – Charley has spent his life having his most difficult thing being to simply breathe. Typical things we take for granted like breathing, eating, and even moving your head around are difficult things for Charley. He is overcoming them well and it looks like there will be no permanent issues at all, which is a miracle in itself, but it is a long road of a lot of work for him. The worst bit is already behind him though. He smiles every time he gets a kiss on the cheek.

We had set up the Because of Ezra foundation early in December and set it aside for a month to do our vacation and holidays. We’re now in January and ready to pour into the thing – flesh out the website a bit more, and begin making solid steps forward. We will be meeting with a few doctors this month to clarify direction in some areas, and are flying to LA in a few weeks as well to meet with some really cool folks who are going to be a part of the fight with us. We’re very excited about the future of Because of Ezra – I know it is going to have a significant impact on raising awareness and pushing funding towards a cure. Many of you have emailed in asking how you can help – we’ll be finalizing a lot of those details this month too. 😀 We have a ton of ideas and we’re looking forward to making them happen, and having you all along the way with us. I’m also looking at writing a book of Ezra’s story this year. There’s so much to do!

The pain of loss doesn’t get any easier. Folks say it hits you less often, but the pain is the same. It’s a deep, gut-wrenching feeling of wanting something so bad and realizing you can’t have it. God promises we’ll see Ezra and Price both again, but never in this life, and that pain hits at the strangest times. Sometimes for a minute, sometimes for an hour. 2010 was a hard year. And not just for us – all around us we’ve seen hurt, confusion, and doubt. Pain has littered the lives of so many we know, and although I know a life without pain is a life without understanding of joy, I can’t help but ache when I see everyone’s struggle. In the New Year, I hope you do make your resolutions to get up on your fitness and all the typical ones. Your body deserves to be respected – God calls it a “temple of the Holy Spirit”. But more than that, I hope we resolve to pay attention to the people around us and care. I said the morning Ezra died – “Recognize the flawed world we live in, and work to help the ones you can. Really work. Recognize the hurt in the world, and recognize the grace that gives us a chance to still be beautiful.” I say that in my head every morning, every day. As we are all in reflective moods this week now that the year has turned, I pray that challenge will find a deep spot in our characters.

Truly, you are all incredible, and I thank God for you all often!