Dave Matthews – 800DAYS from Because of Ezra on Vimeo.

Yesterday was the two year anniversary of Ezra’s death, and we launched our 800days project in honor of the days he lived on earth. I thought it’d be fitting to share with you where we got this whole 800days realization from, and the inspiration for the name.

The following is a transcription of the eulogy Dave Matthews delivered at Ezra’s celebration of life service November 13th, 2010 at Grace Family Church, Tampa, FL, seen above. This talk was the naming inspiration for our 800 days campaign – please take a look and share with anyone who’ll listen. Dad – we love you, and Ezra did too.

I guess I believe that a eulogy should be like a good sermon – it should have a brief introduction, a short conclusion, and they should be close together.

So give me about 5 minutes, because I only wanna say 3 things.

First, I wanna say a very special thanks to all the friends of Kyle and Robyn – many of whom have become close friends of mine – who have labored and struggled so hard for so long to help them in this battle. I think that the true test of friendship was proven over and over, by so many of you who stood by my family for 14 months straight. Never wavering, never straying from their side. Never complaining or tiring of any of the constant need for anything that this kind of battle demanded. Always supporting them emotionally… physically… through a campaign that could easily have destroyed friendships built on lesser love.

Lindsay. AJ and Mandy. Larry and Kim. Mike and Deb Gilbert. Derek, Kalisha. Joy Adcox Sutton – there’s a reason your face is on billboards. Abby, Kristin, the whole Bonham family. Paige… and I could go on and on and on. And those were just the hands that were close. Not to mention dozens – literally dozens – of total strangers that came to the door of my family’s house when I was there, and I would say, who are you? And they’d say… does Ezra Matthews live here?

And there were the hands that were here, but there were also the hearts that were far away. Josh. Jordan. Nate. Leah. Jason, Jacob, everybody – from around the world.

Hundreds of names that time simply won’t allow me to mention.

This is a celebration of life, and so I’m gonna ask you today to clap your hands for the kind of friendship and love that we’ve seen and endured today.

Two. I haven’t slept well for the past few months – and some of you are probably thinking, duh. What with Ezra’s cancer. But what has kept me awake at night has not been that so much as it has been awe. A-W-E, awe.

I lay awake at night in awe of the strength that Kyle and Robyn have demonstrated. At the mantle of maturity way beyond their years that they’ve been forced to assume, and took so gallantly and bore so greatly. You’ve been an example not only to me, but to thousands of people around the world. And your faith in your God has never wavered even in this deepest of possible pains. And I say to you now that no parent has ever been more proud of his children than I am of you two today, right now.

When I grow up, I want to be Kyle and Robyn Matthews.

Third. What about my grandson?

His name, in one number.

That is the time with breath given to Ezra David Matthews.

Robert Fulghum said “I believe that imagination is stronger than knowledge. Myth is more potent than history. Dreams are more powerful than facts. Hope always triumphs over experience. Laughter is the cure for grief. And love is stronger than death.”

In 60 years, I have seen many people come and go in my life, some permanently. I tell you now that there has never been a loss that has been felt so greatly.

In life there are lights, there are shadows, and there are darknesses. Ezra’s light – Ezra’s light was a beacon that called to every face he passed. Like Will Rogers, he’d never met a stranger. Even people who didn’t like kids would stop and talk to Ezra.

Now, just the tiniest of memories loom large. In my bedroom there’s a guitar stand, and every time that Ezra would walk in there he would go over there and he would pluck those strings. Then he would dance a little jig and turn in circles until the echoes died away. He’d go pluck ‘em again; he’d do that over and over – sometimes for a half hour at a time, never stopping. Just laughing and dancing.

His dad taught him to ROAR when his mom would hold a little dinosaur up in front of him.

It was the kind of spirit that was displayed in those small things that he carried into his life that touched, touched literally hundreds of thousands of people.

Shortly outside you’re gonna run into my family again. You’re gonna want to talk to us about somber things – but don’t. This is a celebration of life. He laughed his whole life.

So don’t be afraid to laugh with us even today when you’re shaking my hand or my wife’s. Or you’re hugging Robyn, or maybe you’re giving a chest bump to Kyle.

Don’t be afraid to pass along a laugh – because laughter is the cure for grief.

Today when I think of Ezra I smile. And now even with laughing memories I well up inside with tears, even when I smile. I find myself lying in bed at night with tears in my eyes. I find myself staring at a computer through a veil of tears.

I was a captain of Marines. I was once a leader of warriors. And I tell you now Ezra was a warrior, he was God’s warrior. He carried his message, and through the internet via his father, he carried it to literally over a hundred thousand people in 40 countries. And he did it with laughter.

But Ezra will live on. As Emily Dickinson said, “unable are the loved to die, for love is immortality.”

But Ezra can’t speak now, so I will leave you with one more quotation. Speaking what Ezra can no longer speak, but saying what he demonstrated for 800 days.

Sometimes courage is the quiet voice at the end of the day saying “I will try again tomorrow.”

So from November 8th, for the rest of my life, I will simply say… 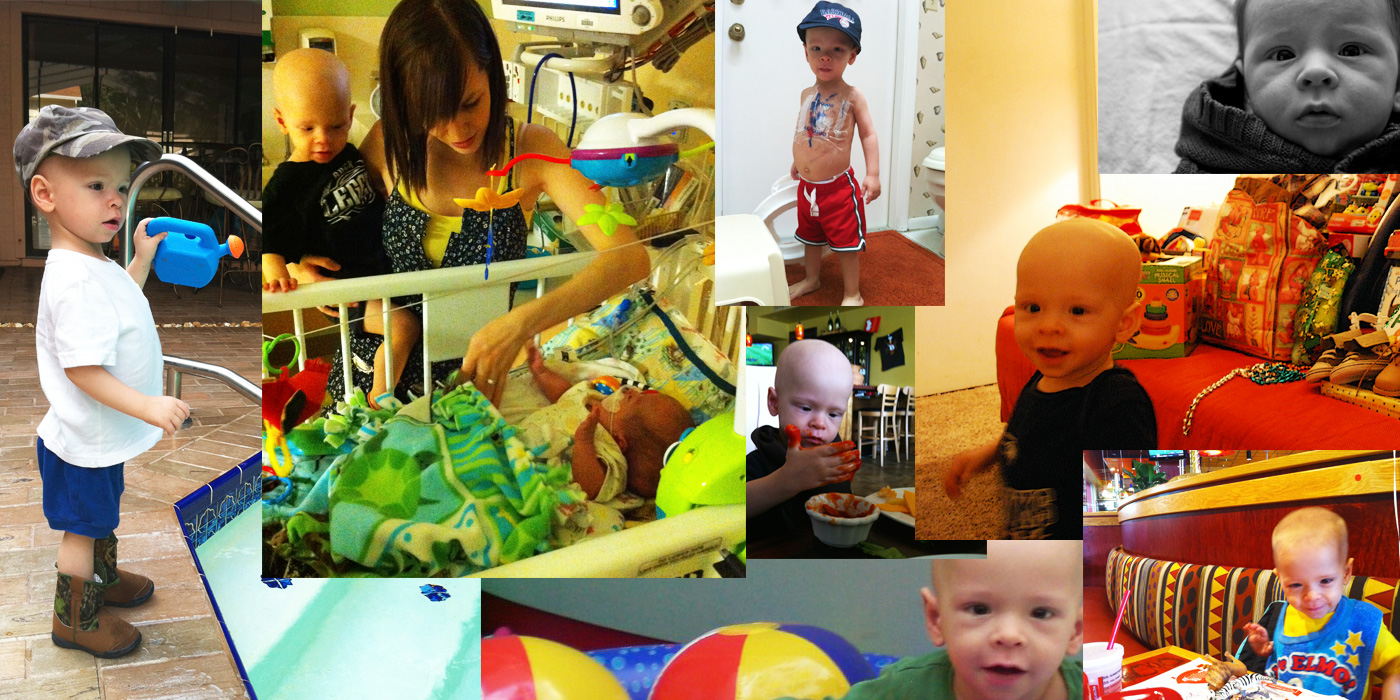 The house still feels wrong without his voice. I sat in my office the other day and watched this video for 30 minutes on loop, crying and laughing. I miss hearing his voice.

We’ve been angry. We’re still angry; at cancer, at us not having enough research yet to cure this, at a world where this can happen to so many families, sometimes at God.

We’ve been sad – a deep, arctic sadness. Vast, cold, lonely… simple and sharp in its pain and so very cruel for that. It hides more as we get further away, but it’s never gone.

We’ve been grateful – for the time we had with Ezra, for all the photos, videos, and stories you and we share about him. For friends who make all the difference. For the incredible people we’ve met these last two years. For you, for reading this.

We’ve felt despair. Moments where the weight of feeling all of this is just too much and ‘overwhelmed’ seems like a word kids use when playing trains compared to the crushing depths our minds get worked up in.

Ezra lived 800 days. Robyn says they were the best days of her life. People say that all the time, of course, but I know they were for her – I’ve never seen her so perfectly happy as she was with Ezra.

One thing we’ve been doing in Ezra’s name is creating these videos to tell the stories of children like Ezra, who are fighting neuroblastoma now. We call the project 800days (800days.org), in remembrance of Ezra’s life. We’re doing this through Because of Ezra, and meeting these families has been excruciating and empowering at the same time. We’ve met families like Caden’s, Malia’s, Brooke’s, Emily’s, and Christopher’s. It is such an honor to be able to do this. It is an honor to tell these kids’ stories, to continue Ezra’s name on such an amazing way to fight; to work with people like Mindy Kaling who have been graciously pouring in support. Please – take a minute today to look at 800days.org and share the videos there. This is something we do Because of Ezra, and it is making a difference.

Robyn and I had a conversation earlier today about how telling these kids’ stories and working on Because of Ezra feels like a way of keeping Ezra alive. It’s how we keep his name being spoken, know his life is still affecting change, and feel like we are still being his parents, looking out for him. Telling stories like his, and fighting to stop this stupid cancer.

In January, day 1601 will happen. It will be more time since he died than his entire life. In 800 days, Ezra changed us forever. He is, and will always be, our first-born son.

I wish he was here this morning.