Here come the big guns. Thanksgiving was great – we’re all Xmas’d up at the house now, giant tree, lights all over, inside and out. We had everything outside done before, and now the inside matches. 😀

Monday starts Ezra’s third round of chemo, so we’ll be in the hospital all week long. This one is a tough round: a much stronger drug will be being used. We know its going to be hard on him, and we know it’s a necessary next step. We’ve had almost a week off from the hospital, which has been good. December won’t be TOO busy medically – we’ll be in the hospital most likely til the 6th or 7th, my birthday is the 8th (28!), he’ll be getting stem cells collected the 15th-17th (if I remember correctly), and then hopefully off until January for the 4th round.

Our little man is still healthy and happy, and responding well to everything so far. Robyn’s mom is coming in the 6th to hang out a week with us. December with family and friends… can’t complain. 😉

So Ezra got his 24 hour MIBG scan yesterday, which is a scan to see where the neuroblastoma is active. We won’t get the results for a few days, but we were able to see the scan as it was happening – and it looked much less than initially, although still very visible. He’s currently getting his 48 hour scan of that (they inject the stuff and scan once after 24 hours and once after 48, then contrast the photos), and then getting a CT scan done to see the tumor size.

In other news – we had Robyn’s first ultrasound today, and we’re very excited to say BOTH ofthe babies look great! We’re having TWINS!!! Life couldn’t get any crazier! 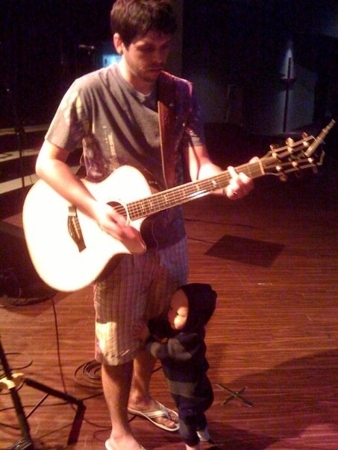 We’ve started our Xmas decorating. 🙂 The yard and house are beginning to look a lot like Christmas, and we’ve still got much to do! Haven’t got our tree yet… just lights lights lights. And a Christmas fish. Yes, those exist.

Ezra had a bone marrow aspiration a week ago or so, and we got results back this week. When he was first diagnosed, his marrow was 50% neuroblastoma (cancer) cells. This past aspiration they took 4 marrow samples – 2 were ZERO % involved (that’s the term – means zero % cancer cells), and the other 2 were only 10-20%! So that’s incredible news – his marrow has responded very well so far! This is great news.

Today he got injected with something called MIBG again (had it when first diagnosed) which will tell us where the neuroblastoma is active still in his body (remember, the marrow is only one of many places the cancer was, including his blood, organs, and bones). They’ll scan tomorrow and Friday, and we’ll get those results next week. I was off on the bone scan date – that’ll be next Tuesday. So by the end of next week, we should have a very good picture of what the cancer looks like now in his whole body. The bones had lesions on them from the cancer when we last checked, and the MIBG scan last time showed the cancer very active near the hips, kidney, left leg, and behind the eyes (a common area for neuroblastoma to affect, and the reason he’d been getting black eyes). 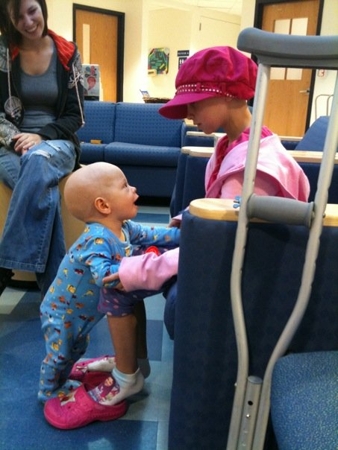 Looks like Robyn’s due date is late June, they’re not 100% on a date yet. Ultrasound this Friday should clarify that! She’s still very tired, napping a lot during the days but feeling less sick, so that’s good. I’m working late at night lately so I can have days free to visit the hospital and watch Ezra, as well as try and help keep the house clean and sane.

Guess that’s it for now… we also wanted to say thank you to whomever left us the anonymous gift through Grace – it’s much appreciated. And to everyone who’s been giving, helping, and commenting – your attention and care means a lot to us. Thank you.

Hello, it’s 2AM Monday and I’m awake getting some work done. Finding time to make work happen while also being in the hospital so much and still seeing the family… its tough! I’ve been telling people who ask, “this whole thing isn’t getting easier, but the difficulty is becoming more normal.” I suppose it’s like if the work was still as hard, but your callouses got bigger. 😀 We’re trudging through!

This week will be a very busy one – we’re in every day but Tuesday, with some slightly big procedures as well. Here’s this week’s lineup:

Monday: Labs/bloodwork. We’ll be in 11-4ish.
Tuesday: OFF!!!! Whatever will we do Tuesday?!?!?! Ezra will still be getting shots from us and have to ingest an interesting thing called SSKI which protects his thyroid from being messed up from the next couple days’ procedures.
Wednesday: Ezra gets an injection of something called MIBG, which goes through his body and is taken up only in active neuroblastoma (Ezra’s type of cancer) areas.
Thursday: Ezra is sedated and gets a 24 hour MIBG scan to see results. He’ll also be getting labs/bloodwork.
Friday: Same as Thursday, but now a 48 hour scan for a contrast.
Saturday: Bone scan. While the MIBG tests for active neuroblastoma areas, the bone scan gives an accurate view of his actual bones. The cancer initially had lesions on Ezra’s bones, and we’re hoping after these two rounds those have gone away and the bones have been able to start rebulding themselves.

Whoops, sorry, things have been so busy I missed posting updates for a whole week! My bad. 😉

So Ezra got out of his second round of chemo on Saturday around 2pm (5 days ago), and we came home and rested. He took this round much better. Monday we visited the hospital again to get his blood work done (Mondays and Thursdays, every week!), which was all good – he didn’t need anything, and we were able to get home by 2ish. Not bad. 😉

Yesterday (Tuesday) we trekked over to St Pete to visit All Children’s Hospital, where Ezra will be getting his stem cells harvested in 6 weeks or so, as well as where he’ll be getting them transfused back into him after the surgery to remove his tumor (4 months or so from now?). That will be an intense admission – he’ll have zero immune system, so we’ll be at All Childrens for over a month in a HEPA filtered isolation room. Whew. Not looking forward to that, but whatever it takes to get this little man well is what we’re going to do.

The drs at All Childrens were extremely informative and easy to talk to, so that’s nice. And by the time we get there, they’ll be done with the new hospital they’re building, and we’ll be staying there – so nice new digs. 😉

Ezra is still doing well. He’s strong and happy. You can tell he’s starting to get annoyed of the hospital – he cries at drs, and doesn’t like when we get out the alcohol swabs (shots!). Course, I wouldn’t either.

Robyn and I are pretty tired, but we’re also blessed with a lot of you guys’ prayer and help. My mom keeps coming around and tidying up the house, doing the dishes, putting stuff away… things that are small but help out a ton when you’re doing so much. MOPS keeps bringing meals. Some of you have brought gift cards to restaurants, which helps as well – all those dinners and gift cards also make it easier with so little time. A few close friends have stopped by to help out and just be comic relief as well. All that means more than we can say, and if we haven’t personally thanked any of you, I apologize – we’re running a bit ragged around here, and keeping track of everything is tough. We’re at the hospital 5 days a week even when we’re not admitted it seems, with meetings, labs, and other things. And a REALLY SHORT hospital visit is 3 hours… we find our free time is pretty much gone.

We seem to have the insurance taken care of – between state and federal programs, we were able to get nearly everything so far and in the future covered (from what we’ve been told). Turns out everyone agrees pediatric cancer is just plain a crap thing to happen, and a lot of programs exist to help out, regardless of income level. This has been a huge blessing to us, as bills from October alone will be well over $75,000. And there’s a minimum of 7 months, multiple surgeries, and over 2 months of admitted time ahead of us. We’re praying everything is covered, which the social workers seem to say it will be. It isn’t set it stone yet, though, and we’re also not sure about deductibles, etc. We’ll see what happens.

I suppose that’s enough chattering for now. I’m going to take my wife out on a hott date, courtesy of my mom and dad watching Ezra so we have a couple hours. 😀 Ciao.

We’ve been in the hospital 3 days so far this round, and things are going really well. It’s the same type of chemo this round (round 3 will be more aggressive), and he’s SO much healthier and happier this time. Going into the last round so weak made it very hard on him, but we’ve been fattening him up and getting him tons of exercise the past few weeks, and it’s definitely helping him – he’s smiling, laughing, up and about, and flirting with just about every nurse he sees. We’ll address that later. 😉 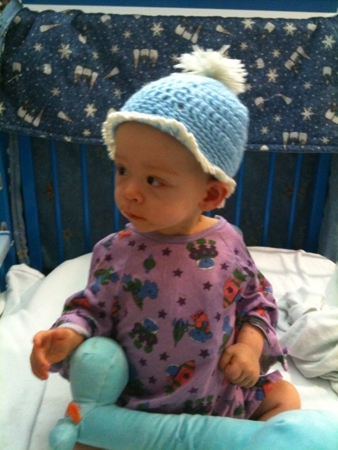 He’s having a little trouble falling asleep, but only because we’re here in the room with me, and it doesn’t get as dark in these rooms as it does at home, so he just sits up and looks at us, ha. We’ve been sitting with him laid on our chest to fall asleep instead, and once he falls asleep we (verrrrrry carefully) get up and set him in the bed. Nurses still need to come in and check his vitals every 4 hours, so it’s tough to get a solid night’s sleep, but Ezra’s smiling face all day makes the lack of continuous sleep not matter.

Robyn’s finally getting her first appointment tomorrow to check on the pregnancy, so we’ll maybe know a due date finally. Thinking sometime in June. She’s doing pretty well with it, just tired a lot. That woman is incredible to be able to be so attentive to Ezra and taking all this so well on top of growing our second kid!