Ezra finished chemo yesterday, and today is his first day of recovery. He seems good, smiling a bit and chattering. He hasn’t been drinking at all, since they have him on fluids, but he has been starting to eat again as of yesterday. Today they’ll be lowering his fluids level quite a bit since the chemo is done, so hopefully he’ll be drinking more formula – that’s important because the formula we’ll have him on (PediaSure) is actually higher in calories than the majority of the food he eats. A ton of calories is important for him to rebuild his nutritional standing so he can make it through the various treatments and things left for him to do. 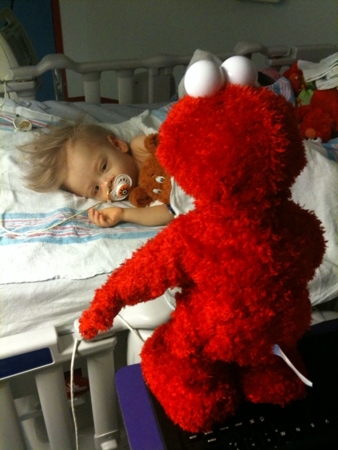 The next few days we’ll be monitoring him to see how he’s recovering – he’s still a little underweight. Pray he eats very well today; if he doesn’t get eating more we’ll need to feed him with an NG tube in the evenings (which I guess there’s a company that will come out to your house and do as well). That’s a tube that goes in through your nose and follows all the way down to your stomach, delivering food and then being removed. The nurses here will also be training us how to give him shots, as he’ll need one daily, and the various medicines he’ll need.

We should be home between Friday and Monday for the first time. The next 9 months are a rough road, but we’re trusting everything will turn out well. Over those months, we’ll be in and out of the hospital quite a bit, sometimes for over a month at a time. We’ll also be home a good bit of that time, although even when we’re home we’ll need to be bringing Ezra to the clinic or having an outpatient doctor stop by multiple times per week.

Sometime next week we’ll be meeting with a doctor from Tampa General who will the following week be doing minor surgery on Ezra to insert a line into his chest. This will be a more permanent IV-type line (as in, something to last the duration of the treatment), where doctors can run his chemo, draw blood, give medicine, and even harvest the stem cells from his marrow which will be done 6-8 weeks from now. At the moment he’s got a PICC line, which should only stay in 6-8 weeks max, but they’ll be removing it when they put the one in his chest. This carries a minor risk of infection, but is a much better solution than giving him multiple IVs each time he comes in.

He’ll begin his 2nd round of chemo roughly 3-4 weeks from now. Once that round is complete, Ezra will have his stem cells harvested from his bone marrow to use later in the treatment.

The doctors say once treatment is complete and Ezra is cancer-free, he’ll need to come in once a month for the year afterwards, every other month the 2nd year, every 3rd month the 3rd year, etc. Eventually he’ll only be doing regular checkups like any kid would.

Please keep praying for Ezra. The chemo is very aggressive, and side effects are all sorts of crazy things that /could/ occur. We’re hoping none of them do, and in a year’s time he’s a healthy, cancer-free, growing boy.