Wow, what an encouraging day.

This morning a great guy named Rick, who is an electrician, and whose wife is a cancer survivor, came to our house and did all our electrical work. Thanks, Rick – we appreciate it a ton.

Shortly after that, I got a call from the Children’s Cancer Center here in Tampa who said they’d had a ton of stuff for twins donated, and they remembered we were having twins, and wanted to give it to us. It was two matching nice wood cribs, a stroller for twins, a changing table to match the cribs, and some gift cards for us. They also had four huge trash bags full of brand new toys and wrapping paper as part of their Christmas program – I had to tie the back of our SUV down since it wouldn’t close! 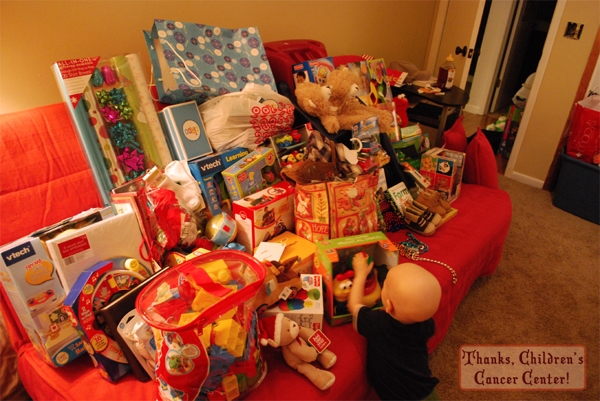 The most encouraging part of the day, though, was at the Christmas dinner tonight which the Children’s Cancer Center puts on each year – this year was at the Airport Hilton. We met a couple other families whose kids were neuroblastoma survivors – one was 4 years clean with still no sign of cancer, and another was two years cancer-free. These were the first families we’d met who’d BEEN through neuroblastoma (we know another lady who is also going through it as we are), and their stories and the smiles on their kids as they ran around playing were great for us to hear. It makes it so much easier to see the healthy future when you’re looking at kids who have beat the same thing Ezra has.

We got results back on Ezra’s bone marrow aspiration he had last week, and of the 4 places checked, 3 were 0% involved (no cancer at all), and one was so miniscule they said it would have no bad effect if we harvested the stem cells now. We’ll be going in tomorrow to check his white blood cell count (goes down a lot after chemo), and IF that’s high enough, he’ll have his stem cells harvested Wednesday. They say there’s a good chance it won’t be high enough yet, and we’ll have to wait til next week. Either way is good.

After talking with the families tonight, we’re considering whether we will even go through with the actual stem cell transplants after his surgery. We may keep the stem cells at Moffit, and see how things go – they gave us the contact info to one of the top doctors in neuroblastoma, and we will be requesting copies of all Ezra’s work to be sent to her as his treatment progresses. Here’s praying we won’t even need the stem cell transplant – that’s a VERY hard procedure on him.

I definitely see God working a lot in our family, our mindset, and the people around us – and yes, even in Ezra’s health, ha – through this situation. Years from now I know this time in our lives, as difficult as it is now, will be one of the huge shaping moments in who we are as individuals, and as a family.