“Apheresis (from Ancient Greek ἀφαίρεσις (aphairesis, “a taking away”)) is a medical technology in which the blood of a donor or patient is passed through an apparatus that separates out one particular constituent and returns the remainder to the circulation.” -Wikipedia

We’re at All Children’s Hospital in St Pete as of last night, and will most likely be out of here this afternoon. Ezra is getting his stem cells harvested as I type this. The machine looks straight out of a 1968 sci-fi episode, and there’s a good 15 feet of tubing on it, with his blood circulating through. At some point in those tubes, the blood goes through a centrifuge, which pulls out the stem cells (we have been giving him supplement shots the past few days to boost those wayyyyyy up) for storage at Moffitt to use later if we do the stem cell transplant after his surgery to remove the tumor. The rest of his blood continues on down the line and back into his body. He’s all hopped up on Benadryl and morphine (as needed) to keep him still, as too much movement messes with the procedure. We started around 10AM, although we were admitted last night and we attempted to sleep. 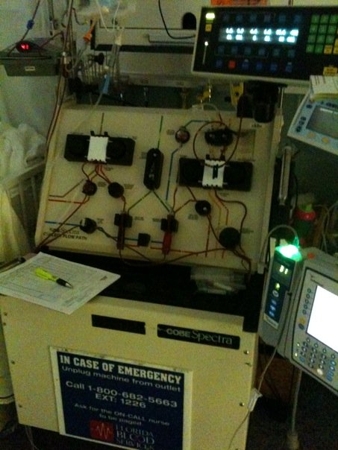 As a hospital, All Children’s has a better room service… but that’s about it. 😉 We’re getting spoiled with St Joseph’s, I’m coming to realize. We normally do all our treatment at St Joes, but they don’t have the department to do stem cell harvesting, so we came here just for that. The rooms each have two patients – which makes it REALLY hard for Ezra to sleep (he only got a few hours last night), so we’re glad they’re keeping him nice and drowsy today – he needs rest! Otherwise he’s hearing the baby and mom in our room also the whole time, and wanting to go see who they are. These guys also lock up pretty much everything – so we have to page a nurse even to get a cup of water. 😀 No big deal, just more on the annoying side than we’re used to. Oh, and the wifi is reallllllly slow. Ha. Creature comforts missed…

Good news is this is a quick deal, we’ll be home by evening, and that’ll be the end of Ezra’s hospital trips for the rest of the year (with maybe a couple visits to get labs checked) – no more big stuff. Christmas free of medical obligations!

I’ll let you guys know how the harvest goes this evening when we’re home.