The transplant happened a couple hours ago, and went well. It’s an interesting procedure. His stem cells were harvested way back after the 3rd round of chemo (http://www.carepages.com/carepages/EzraMatthews/updates/2469286), and have been being stored at Moffitt this whole time (the only place in the area that can store stem cells). The doctors ordered them delivered this morning, and the truck left Moffitt at 9am. Enough cells were harvested from Ezra to do TWO rounds of stem cell (which pretty much never happens, but pretty much isn’t never – better safe than sorry), and half that (a full transplant) was trucked over today.

It comes frozen delivered to the blood bank at All Childrens, and injecting must begin into Ezra’s central line within minutes of being thawed. There were a total of 150 mls (a little over 5 oz, a little under 2/3 of a can of Coke) injected into him. It comes in three separate 50cc syringes, which each take about 20-30 minutes to push into him. One nurse stands and slowly pushes the stem cells in through the syringe, stopping after every few ccs to check his heart rate, blood pressure, temperature, etc. Another watches the vitals constantly, while the dr stands and watches as well. I’ve uploaded a photo to the photo section here of the cells being injected…. 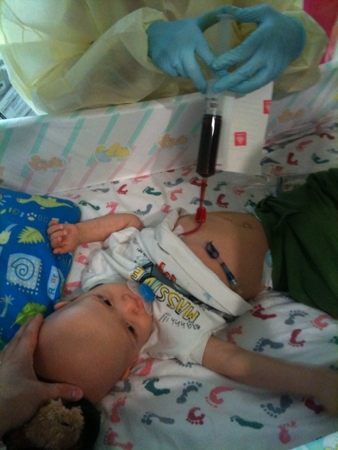 During the process, because they’re so cold and the solution is thick, his heart rate dropped considerably throughout, and they’d have to pause, wait a minute or two for it to go back up, then push more cells in. Heart rate was ranging from 150 all the way down to low 40s. Average for him is 110. They did an EKG which showed normal, as well as gave him lasix to help him pee out much of the liquid to help keep his blood pressure normal.

His condition will most likely get worse over the next 4-6 days, and then improve as the stem cells continue to build up the white blood cell count to it’s normal state. At the moment, it’s effectively zero. We’re seeing more mouth sores now, and he has not eaten at all today, or drank anything – but that’s alright since he’s on IV nutrition and fluids. Now, we basically bunker down and let his body rebuild.

Remission isn’t officially called yet, I think they may want to do a few doses of radiation once we’re home from this before they call it, as well as tests to verify everything after our transplant stay is finished. But it’s close! And of course there’s still some months of after-care which he goes through post-remission.