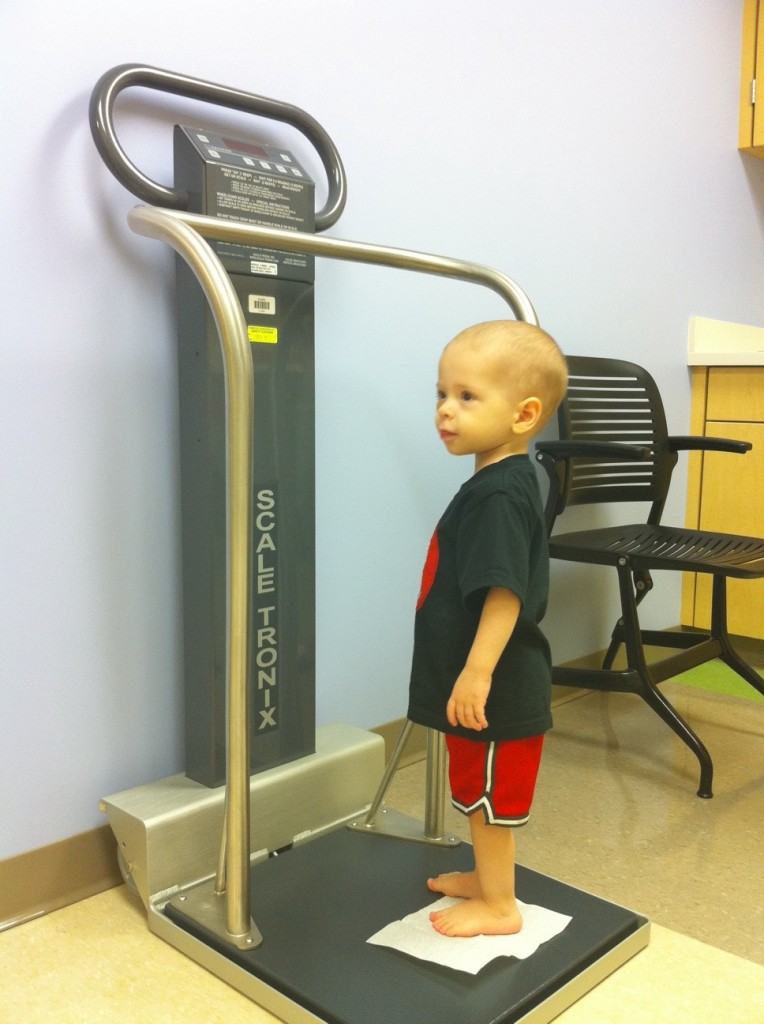 We’ve confirmed with the doctors the lump on Ezra’s face (by the right eye) and on the left side of his neck are, in fact, tumors. We were at All Children’s today about to start the chemo which was a 2-3 hour one and then head home, when Dr Nieder came in and said he’d been on the phone with New York (Memorial Sloan hospital, the leading neuroblastoma research hospital) and they recommend something different. Because this cancer is SO aggressive (relapse within 100 days of stem cell transplant is very rare and aggressive), they recommended we use a much higher intensity chemo. This is not normally the best choice, it being so close to stem cell transplant,  since it could drop his counts very quickly. However, because the cancer is aggressive, treatment is called for to hit this cancer as hard as we can. We have enough collected stem cells in case his counts do drop too far we can reintroduce them and get them back up (yes, that means a 2nd stem cell transplant, although those don’t take as long since the majority of the time spent in the last one was recovering from the chemo, not the transplant).

The goal right now is to make sure there is a reaction to the chemo. If there is one, we can move forward with other treatment. Assuming the chemo DOES work, there will be a visible method of showing this – his tumors will shrink. Because the one on his face is easily visible, we’ll know within a week or two of chemo being over if it worked. More scans can be done as well, but the tumor shrinking will be the most obvious effect.

If the cancer is affected by the tumor, the next treatment option we are looking at with New York and our local oncologists is something called MIBG therapy. He gets MIBG scans right now to show where the cancer is. The way this works is MIBG is very slightly radioactive and viewable with a specific scan, and neuroblastoma takes up MIBG cells. So they inject it, wait 24 hours, and do the scan. The glowing areas will be neuroblastoma (and a few parts of the body which normally take up MIBG as well).

With MIBG therapy, before injection, the MIBG is attached to radioiodine. This is a form of iodine that is radioactive. The MIBG chemical is taken up by the cancer. The cancer cells are then killed off by the radioactivity. No surgery is involved. This is an intense treatment, done in a lead lined room with limited contact. There are only a few hospitals in the US you can get this in, NY being one. It has been shown to work very well. It’s a 5 day process, in which Ezra, being so young, would be kept under mild sedation the entire time. Older kids are awake and active, and say doesn’t feel as bad as chemo, it’s just boring. Ezra being so young wouldn’t understand and has to be kept nearly asleep the whole time. We are not allowed in the room except the last couple days, and even then in the farthest corner from him if we do go in. Nurses even are not to be in the room more than 15 minutes at a time or so, and even then with special outfits.

We’ve been in more contact with folks who are experts with neuroblastoma (read: the folks in NY), and have a better grasp of what this relapse so soon after transplant means. There is currently no cure for his situation. The medical term for the goal of these treatment plans (which are the best options available) is “prolonged life” with an extremely low chance of “cure.” The “prolonged life” can add “up to” 5-7 years of life –  the hope then being for a miracle, which we know is possible. Whether through a cure being discovered in that time, or God simply flat out healing Ezra out of nowhere.

The quickness of this relapse changes a lot. Neuroblastoma only has about 650 cases per year in the US, so without talking to a specialist (which we’ve been doing much more since the relapse) it’s difficult to figure out what to do when you’ve gone off national protocol. Up until the relapse we were moving according to the national protocol for neuroblastoma (chemo, stem cell, antibodies, after-care), which works well in the majority of cases, and is recommended by specialists as well. Since relapse, we are thrown off the beaten path, there is no protocol in place, and things are much more hairy.

We’re forced to make crucial decisions quickly, and it’s a scary feeling. We’re reading, calling, faxing, emailing, and finding every way possible to ingest even MORE knowledge of this cancer and treatments in order to make the wisest decision, and so far we’re at what I’ve discussed above. If it sounds like we keep changing plans and such often throughout these updates, it’s because it’s exactly the case. Cancer doesn’t stick to a plan – it changes, it reoccurs, it has a mind of it’s own it often seems. One day you’re having a birthday/No Evidence of Disease party, and the next day you’re writing an update saying there is 20% cancer in the marrow and new tumors present. There is no warning, and there is no graceful fall – you’re just suddenly at the bottom of a hill you were halfway up a second ago.

Charley is still doing well, and should be home within the next couple weeks. He will still need oxygen, and will have a G tube in his stomach for feeds.

All this to say please keep praying. Keep holding up our arms for us, because they are heavy. We know God does miracles.