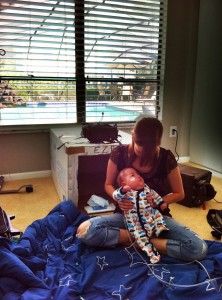 Been a while since I wrote a health and where-we’re-at update, once again. This one is a good update!

We’ve been intensely busy these past couple weeks (I guess these past 10 months, ha). Ezra finished his ICE chemo, which sounds way more glamorous than it is. It is supposedly a very intense chemo which can have serious complications during administration, but Ezra flew through it without so much as a hiccup. If anything he was a little more tired than normal, only as his hemoglobin went down. And the cancer WAS reactive to the chemo – whew. The tumor on the side of his face has gone down considerably but is still present. The one on his neck is nearly gone. This is a good sign, and we will be doing another round of this same chemo in 10 days or 2 weeks most likely. We are still looking at heading to Memorial Sloan in NY after that (possibly end of this year).

This chemo HAS put Ezra’s counts very low, so we’ve been in the hospital 4 days a week with labs, getting blood and platelets, etc. He has shots daily at home (same as always after chemo) – which I hate giving because he knows what they are and when they are, but isn’t old enough to know WHY they are. :/

It’s been 191 days (192 if you count today) Charley’s been in the NICU, and today we loaded him and a bunch of gear into our car and drove him home. He’s on an oxygen tank, an apnia monitor, and has a feeding pump. He has leads on his chest to measure heart rate and breathing rate, and has a tube in his stomach for feeding. His oxygen is only at 0.2 liters, if you know anything about that – which is practically the lowest he can be on – he shouldn’t be on it longer than a month. The feedings are every few hours, for one hour, with a 10 hour continuous feed overnight. He has 5 medicines he’s on which we use a syringe and shoot through his G tube.

Anytime we take Charley anywhere (like tomorrow Robyn has appointments in Tampa for him while I have appointments in St Pete with Ezra) he’ll need all that gear with him – oxygen tank, feeding pump, and apnia monitor. He’s actually healthy and doing well, but is not yet to a point where he’s able to do all the things a normal baby would do at his age (which developmentally is about 2 and a half months at the moment). Like, y’know, breathe fully well on his own, convert air to oxygen… suck on a bottle. Minor things. 😉

The Hope For God’s Children auctions start tomorrow, and I’ve been getting a lot of questions on how it works. Essentially, a bunch of designers have created children’s stuff (clothes, accessories, etc) which they list on eBay and Etsy and people bid on. All proceeds go directly to us to help out with life and medical. We’re about to have expenses pile up with plane trips to NY and a lot of home health stuff which may not be covered with our medical coverage, so it’s good timing. I’ll write an update tomorrow as well with info on how to access the auctions, or you can check hopeforgodschildren.org – right now nothing’s live.

Anyway, there’s probably more, but basically I’m wiped out and life is about to get even busier (how is that possible?!) so I’m signing off now to go help my beautiful wife with our kids. 😉