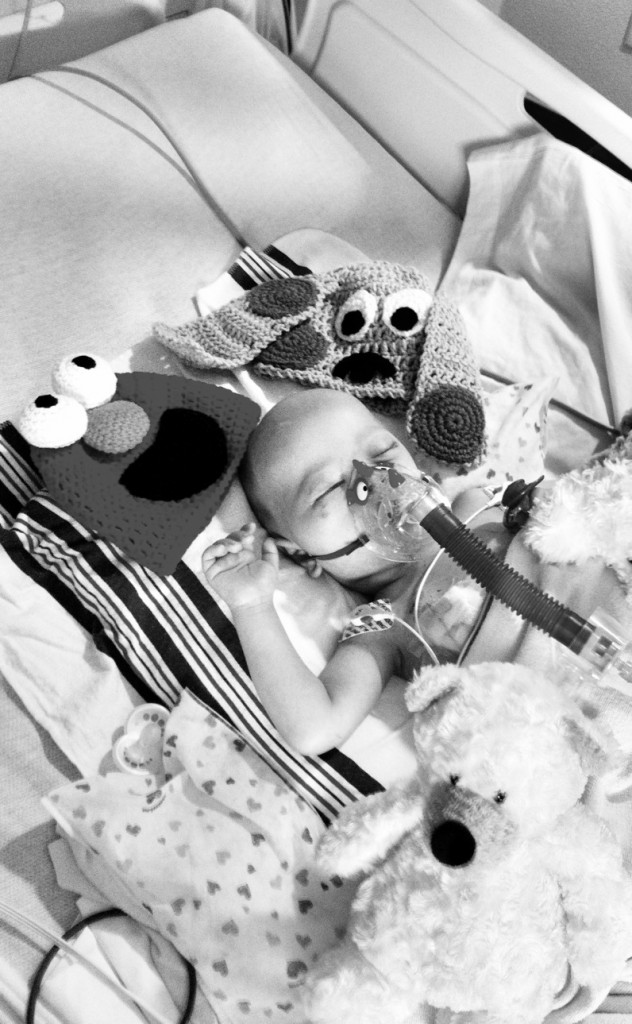 Things today are much the same – we were able to get Ezra to take some of the Nifurtimox this morning by dripping it into his mouth with a syringe. Last night we tried to get him to take some but it mostly came out of his mouth. The Nifurtimox is a pill which we crush and mix with Coke (seriously – the dr told us it’s what they’ve found it mixes best with) and syringe into his mouth. The problem is he isn’t really coherent, so it is tough to get him to drink. Even from this morning, much of the syringed liquid just sat in his mouth until he swallowed by reflex some.

When I say “stable” in the posts these past few days, I mean his heart rate is within normal range as well as his blood pressure and breathing rate. He is still requiring a lot of oxygen support, although it’s still just through a mask (he CAN’T get intubated right now anyway even if he required it) – but the respiration therapists say they usually don’t even give this much oxygen through a mask. It’s just our only option right now. Even with that, his 02 saturation (us hospital folks call it his sat) is hanging at 94-95, where he’s never been below 100% until this stay.

Ezra hasn’t had anything to eat in almost a week now. He is on fluids, but it’s a delicate balance – he’s a bit swollen from the amount they have to give him, but he HAS to have that much to flush out the chemo. Yesterday was the last day of chemo, so we may be able to dial that down over the weekend. He hasn’t had more than a sip of drink in 5 days, and even in the last 5 days it’s literally been 1 or 2 ml at a time, a few times a day. Yesterday and today it was only to try and get the Nifurtimox in him.

He has been asleep this entire week. He’s unable to sit up or move much other than a hand looking for his pacifier or an arm rubbing his eye if the morphine goes too long. His eye by the tumor looks worse. He’s woken up for 30 second spurts occasionally early in the week to say something or look around, but that’s dwindled quite a bit to where we haven’t heard him talk (other than “no” if we try to clean his mouth, which is getting dry from all the 02 the mask is pushing and no drinking) in a few days now.

I can’t help but feel like he’s getting much more worse than better. We hold on to hope, and I’m not honestly not sure whether it’s a faith hope we are holding onto or pure blind desperation of wanting to see our son smile and talk again. I wonder if this is even fair to him – he’s just laying in a bed, drugged up on morphine (letting that slide more than the 2 hour increment he’s on now results in his heart rate jumping and him moaning and hurting) and being supported by medical pumps and daily infusions since his blood counts don’t stay up. I sit and play my guitar to him, and Robyn and I must have said “I love you” more times to him this past week than in the whole past year – and we’ve never been stingy with that.

The chemo can take up to 5 days to show any results, so we’ll see if there are visible changes anytime in the next few days. I’m praying like I’ve never prayed, and literally tens of thousands of you are as well – sometimes God simply is calling someone home.