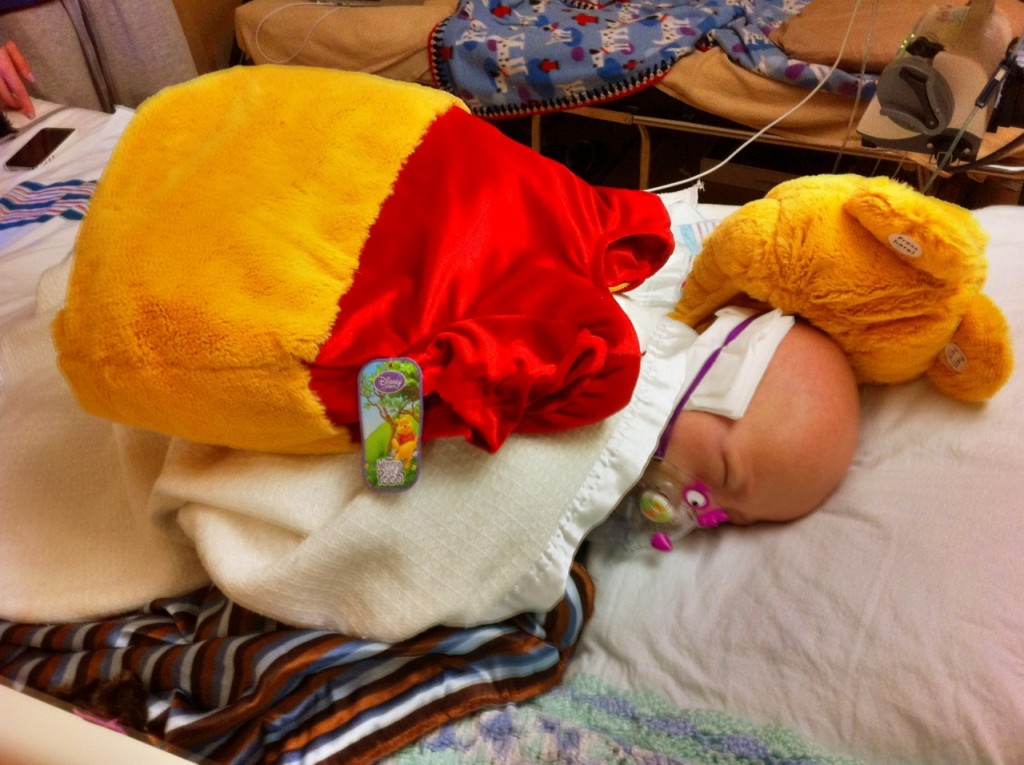 We had a fairly uneventful Halloween here. Well, Robyn and Ezra did I should say. Like a chump husband, I had to be in Denver on business so I was gone all day Saturday and Sunday. And thanks for asking, yes it went well. 😀 My folks stopped by the hospital to keep her company, as did her mom.

Things are pretty much in a holding pattern at the moment. He still hasn’t spoken or eaten. He still hasn’t really been “alert” – although he has definitely been awake and watching some cartoons. So maybe you could call it “alert,” just not interactive. Today marks two weeks past the day the drs had thought he most likely wouldn’t make it through the night.

Ezra got an infection over the weekend, spiked a tiny fever (100.5), and they gave him antibiotics to help push it back down. His heart rate had been up to 200 while he fought that, and now seems to be much better back around 130s. Still high for him, but low for this stay. His liver is also inflamed, and we do not know why yet.

The nurses thought it would be a good idea to try and clean out Ezra’s mouth with a bristled tooth brush, which apparently it wasn’t. His platelets were already really low. Something either nicked him in his mouth with the bristles or dislodged a scab or something from a mouth sore, and he wound up bleeding for almost 3 hours while they loaded him up with two bags of platelets. Ok, so maybe the weekend sounds like it was eventful, but really – by now us weathered hospital folk term this a boring weekend.

So let’s review. What’s the plan? We’re waiting on his counts to come up, and as soon as they do we are going to repeat the chemo. We’re still looking at Monday for that – but really it comes down to if his body will be ready or not. His white blood cells are coming back already, although tiny amounts. Monday is a very real possibility for starting another round. Assuming that goes well, we’d need to wait for his counts to recover AGAIN, then do some minor surgery to get rid of the fluid in his lungs. The fluid in his abdomen should drain itself by then, but the lung most likely won’t. Then there’s a day or two recovery from the surgery… we may well be here another month at least. If we get to there though we’ll hopefully have a once-again healthy Ezra and Charley all in the same place. Pray!

Robyn is a ferocious lioness who speaks out treatment plans and tells the drs what to do, ha. There’s literally been 3-4 times she had to tell them what something probably was, had them test/do it, and she was right. When they weren’t sure what to do at all. They’re smart folks – she just knows her son well.

I miss Charley. I miss home. I miss a bed which doesn’t wake me up literally every other hour with messed up shoulder pain. I’m tired. We’re both tired. We’ve been exhausted for a year. We’re doing everything we need to be doing, I know that. I know all the comforting words and viewpoints, I know this too shall pass, and I know we’re where we need to be right now. It just sucks, the whole thing of it. Days kind of just pass, you never know which day of the week it is or what hour. I’m hungry… what meal should I be eating right now? That sort of thing. You know when you’re really tired and you get that ache behind your eyes feeling? I feel that more often than I don’t.

Anyway… enough of that. I think I’ll go grab a Dasani from the Family Resource Room and some ice and a cup from the Family Nutrition Room and hit the sack. Thanks for hanging out, you guys are all great.