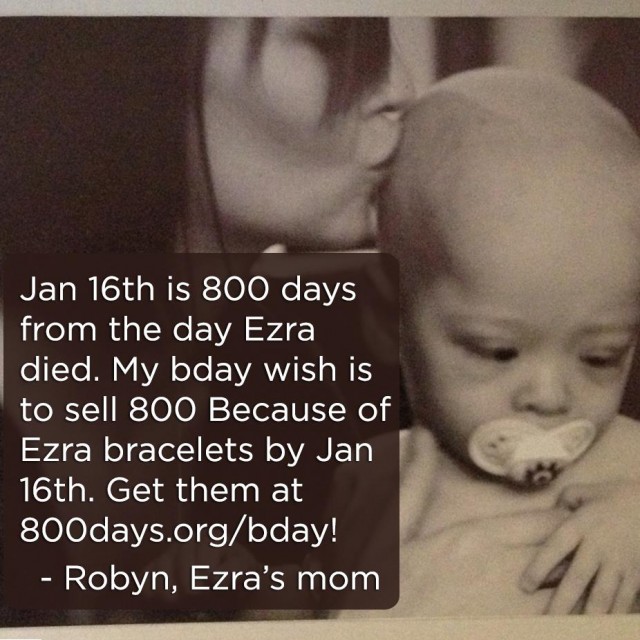 Today’s my birthday, and I’ve got one wish. Ezra lived exactly 800 days, and January 16th will be 800 days since he died.

I wish for us to sell 800 Because of Ezra bracelets by January 16th. I’d like to see Ezra’s name all over this country. Of course, any money raised will go to Because of Ezra – into research into a cure. Plus – we have a cool announcement on the 16th as well.

We’ll keep a current count at the link below! Thanks, everyone – you people make me smile every day.

My dad died when I was 9. Other than a cat we’d had, it was my first personal experience with death. I remember so much about my dad’s character – he was strong, and he was funny. He was not the kind of person you wanted to mess with. He had 5 sons and 1 daughter – me. I could melt his heart like butter. He gave me really high standards of what a man should be, and how a man should treat me. Kyle more than lives up to these standards.

I learned a lot at 9. My mom taught me there is no wrong or right way to grieve. Grieving is so personal, and different for everyone. If we don’t judge each other, we can be more honest. I knew Kyle would grieve differently than me, and I than him. We try very hard to let each other grieve the way we need to, and be honest about how things are feeling. My mom also taught me happiness can be a choice. She’s chosen to be happy, and to always push for more. When she sees things that aren’t right in the world, she does her part to change them. I remember telling Kyle early in our marriage my mom is the strongest person I know.

Charley doesn’t FEEL 2 yet. He’s doing great for himself, and although he has plenty of issues he’s working through, there is constant slow progress. His personality is stubborn and strong. It’s hard not to be reminded of Ezra at 2 (he died just 2 months and 8 days into 2 years old) with Charley’s birthday coming up, and note the marked differences. Even Charley’s birth itself was so much different from what we’d been used to. When Charley and Price were born, I’d been on bed rest for weeks, and was suddenly rushed into an emergency C section, with the twins instantly pulled away from us – we didn’t hold Charley for 3 weeks (Kyle didn’t until he was 6 weeks old), and the only time we ever held Price was when he died. Charley was taken straight from me to the NICU, and there he stayed for 191 days. It was a very hard time, during which we were in treatment with Ezra, and eventually lost him.

Developmentally, Charley is closer to 11-13 months than 24. He doesn’t walk yet (although he’s great in his walker), he doesn’t talk aside from a few sounds like “baby” and “dada” – of course I swear I’ve heard him say “mama” too. He’s just recently made huge strides in eye contact. We’ll be getting leg braces for him soon to help his legs and muscles sit correctly, and he’ll be getting eye surgery in April to fix his left eye, which doesn’t ever look where the right one is looking. 🙂

Within all that, it would be easy to continue to grieve and be overwhelmed by everything. Some days we are. A lot, in fact. My mom’s strength and attitude towards life are a constant reminder to me to see the smiles on Charley’s face, the warm Florida sunshine, and the love of my husband and friends. My mom’s birthday is March 14th. Every year on that day my mom turns 40. March 15th is Charley’s 2nd birthday. We’ll get together with loved ones, and enjoy the day. Our little family is strong, and we are re-learning happiness.

[this update written by Robyn]

Two years ago tonight, I went into labor with my first son. I knew he would be my little life changer, although I wasn’t expecting all this at the time. Over the past 10 months he’s been battling neuroblastoma like a champion, putting up with a huge amount of tough situations and hard times. He’s the kind of kid who makes everyone smile, and he’s made all this much easier on Kyle and I – just seeing his smile, or hearing his voice, or him grabbing our hand… it makes a huge difference in days that can seem hard to find a reason for.

Thank you so much to everyone who came out to the party yesterday – we packed the house and we were so happy to see you all. We have an amazing group of friends, we really love you guys. Over 120 of you stopped by to enjoy the pool, the grill, the company, and Mandy’s vegetarian chili! Ezra had a great day as well, so thanks again to everyone.

Neuroblastoma is a tricky cancer – it has a high reoccurrence rate, so high that doctors don’t even give these patients a “remission” status. They call it “no evidence of disease.” He was given that status after the stem cell transplant.

We went in today for weekly labs, and Dr Rossbach had a meeting with us to go over the results from some of the scans from last week which we hadn’t heard results on. Specifically, Ezra’s bone marrow, which showed evidence of neuroblastoma again. One side was clear, but the other bone marrow aspiration showed 10-20% neuroblastoma cells. It’s a big setback, and we’re not sure what to do now. It’s hard to term this, it could be called relapse, it could be called “progressive disease”. The difficult part of this is the neuroblastoma that’s still here has most likely been there the whole time but hiding somewhere, and is now coming out after all this treatment – meaning it’s much more difficult to get rid of. It’s a very serious setback.

We’ll be getting a call from St Joes in the morning after the oncologists go over some options – most likely we’ll go in to chemo Wednesday, which will be a 2 week stay in the hospital, followed by 2 weeks at home. We’ll repeat this twice total and then check his marrow again. We’re hoping to be able to do the chemo at All Children’s since Charley is still over there, but we’ll have to see.

Please keep praying – the prognosis on neuroblastoma is one of the lower in childhood cancers already, and once you have progressive disease it’s even lower. It’s scary. We know God still is God, and we’re praying hard. Because of this happening, we can’t do the antibody treatment (at least not in Tampa) that we were thinking was next. We’ll do the chemo, and then we will probably have to go to New York for a few months for treatment afterwards. There’s a great hospital there called Memorial Sloan which is the top neuroblastoma hospital in the US. They have a lot of experimental treatments and studies running which show a lot of success. Once a neuroblastoma patient has relapsed there’s actually no protocol even in place – it’s all “well this has worked alright” or “we’ve seen good things with this.”

Tomorrow (Tuesday, the 31st of August) is Ezra’s 2nd birthday. We’ll take him to the zoo I think. Today is yet another life-changing day.